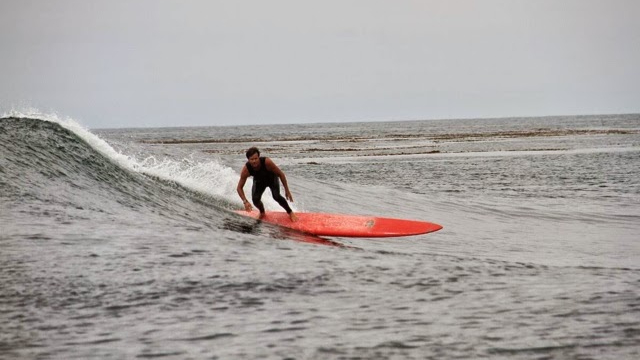 Greetings, Shredderz! Unfortunately, I don’t have any photos of the Dave Parmenter Makaha gun mentioned in the title of this post. This entry is a reprint of a letter Dave Parmenter wrote over twenty years ago. Some quick background: in 1997, the organizers of the Waterman’s Ball fundraiser held an auction featuring a few custom made surfboards. The proceeds were then donated to the likes of the Surfrider Foundation and Heal the Bay. One of the auction boards was a 10’5″ Dave Parmenter Makaha gun. Parmenter, who is equally talented with the pen and the planer, wrote an incredible letter to accompany the board, which Surfer reprinted in its 1997 Big Issue. Surfer has sadly wound down its print edition, and hasn’t shown much interest in putting its archives online, so I figured it was worth running the letter here. Full text below:

This letter certifies that you have bought an authentic surfboard shaped entirely by hand by myself in my backyard shaping room at Makaha. No computerized machine, ghost-shaper, or other pop-out technology was used. I did not at any stage leave it unfinished and go golfing or bass fishing. It was shaped in a single afternoon on April 17, 1997 when the surf was flat, the water too murky for diving, and my block planes were freshly sharpened. I have included a few operating instructions below:

First, this board is not a wall-hanger. It does not belong in a surf-theme bar. It is identical to the boards I design and ride for Point Surf Makaha. This surfboard is not a toy…it is not a prop to be perverted into some sort of currency by unprincipled collectors or nostalgia buffoons.

Calm down, now…relax. You can hold your breath for 90 seconds. All you need is the right day, 2 bars of wax, the courage of a lion, and the theme music to the chariot race in Ben Hur coursing through your mind.

When men first made the quantum leap from riding gentle soup at Waikiki to conquering the Bowl at 20-foot Makaha this is the tool they envisioned and built; not for looking hip on the beach, not for imaginary high performance…but for survival!

You can “re-invent the wheel”, slim and slenderize it, and put bells and whistles on it…but you can’t change the laws of physics: when you’re straining to break over the ledge of a twenty-foot wave into the teeth of a 15-knot offshore wind, blinded by spray and heckled by doubt…a man needs this tool!

Before leashes, jet skis, surf faxes, tow ropes, and skinny surfboards gilded with fad and fancy and designed by “master shapers” who have never surfed a wave bigger than 10 feet, there was only sane, proven hydrodynamics mastered and channeled by watermen who didn’t dial 911.

I love the letter, even though I have definitely never surfed a wave bigger than 10 feet (and God, is it possible that I might be a “nostalgia buffon” myself?!). Apparently Rusty Preisendorfer ended up purchasing the board, though I don’t know its whereabouts today. Preisendorfer and Parmenter share some history. Parmenter was an early team rider for Canyon Surfboards, where Rusty shaped before his eponymous brand; and the two went on to collaborate on some early Widowmaker designs in the mid-Eighties.

I believe the auction board was likely a Makaha Machine model, which you can read about on Parmenter’s Aleutian Juice / Nowtro website. The description on the Nowtro site is also classic Parmenter: “At full length, the Makaha Machine is a doomsday rhino chaser, all indomitable paddle power with battering-ram penetration and bombproof holding power that sneers at chop and wind.” The Makaha Machine is a modern interpretation of Dick Brewer’s timeless Bing Pipeliner model, which Parmenter considers a revolutionary design in the history of surfboards.

Parmenter is never afraid to think for himself, which is a quality I really admire. He is not only a unique and compelling figure, but someone whose legacy will likely be one of the greatest shapers in the rich history of California board builders (though this description might not do justice to Parmenter’s experience in Hawaii.) For more Parmenter material, here is a great interview he did with New York City’s Pilgrim Surf + Supply, and his appearances on the Surf Splendor podcast are also worth checking out.

Photo at the top of the page via The Big Slide