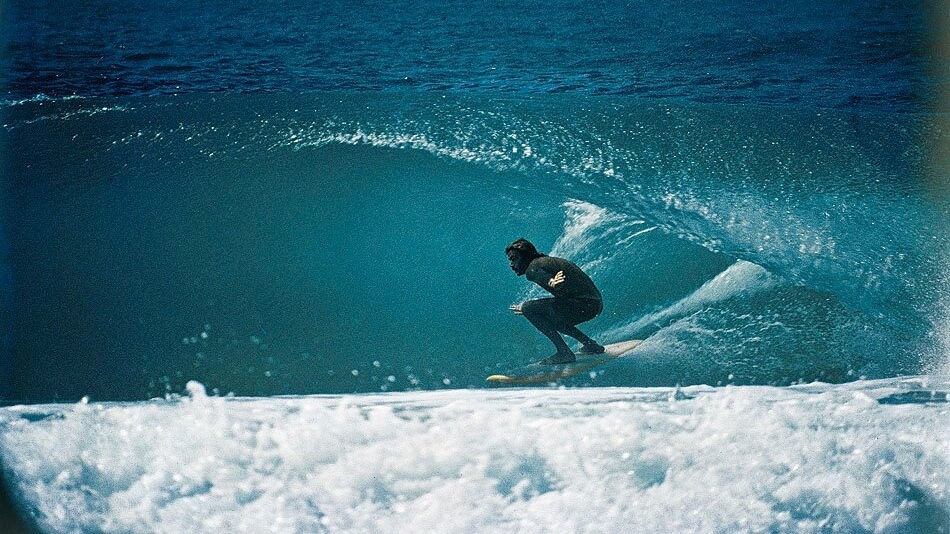 Greetings, Shredderz! I’ve featured a few interesting Michael Peterson boards lately, including a single fin MP shaped under the Burford label, and another single fin crafted under Goodtime. I’ve probably gone about this somewhat backwards, as most people associate MP with the boards he shaped under his own name. Today we’ve got a Michael Peterson fang tail surfboard produced under the Shane label. Thanks to Aaron, who was kind enough to share photos of the board you see here.

Surfresearch.com.au is my go to resource for anything relating to Aussie surf history. According to surfresearch’s excellent entry for Shane Surfboards, the label has been around since the early Sixties. I’m not sure if Shane is still shaping, but the brand’s website is still functional. Shane is the namesake of Shane Stedman, whose son Luke later went to compete on the WCT.

Shane produced a Michael Peterson model in 1975. According to surfresearch, many of the Shane MP models produced in the mid Seventies were shaped by folks other than MP. For example, here’s a Shane MP model that was clearly signed by PC, said to be Peter Clarke.

It’s hard for me to determine what exactly the “stock” Shane MP model was, or if it even existed. Based on the ad below, it seems like at least some of the Shane MP models featured the black and white graphic of MP performing a frontside cutback. You can see the same graphic on the bottom of the board featured in this post. There are many examples of other Shane MP boards that do not have the graphic. Here’s an example of a clean Shane MP shape, which has MP’s famous fruit bowl logo with a Shane laminate overlaid on top of it; and here’s a Shane “Custom” also bearing MP’s fruit bowl logo paired with the standard Shane graphics.

There are a few reasons why I believe Aaron’s Shane MP board is not a stock design (again, assuming that there is even such a thing.) For starters, there’s the incredibly cool graphics pattern on the deck, which I have to think was custom. In addition, the board was likely shaped by MP, as evidenced by the clear signature:

The text can be a bit hard to make out. On the far left above the stringer it reads 6’8″, which I believe refers to the length of the board. In the middle, beneath the stringer, it says “MP 18.” I’m not sure what the 18 refers to. The signature is very consistent with another MP Shane board I’ve seen, which you can see here.

The signature reads “Flier Fang Tail” at the far right, above the stringer. As you can see in the various photos, Aaron’s board has wings (also referred to as flyers) that segue to a fang tail. The outline is the last and most important piece that makes me think this board was anything but a standard design. That said, Aaron’s Shane MP board is a bit more subdued than the classic Michael Peterson fang tail design, which has a lot going on.

Apparently the photo above was taken in 1974 (see source), and if MP started producing his Shane boards in 1975, that would mean the board featured in this post is a refinement — or at least an experiment — on the infamous MP fang tail. Of all the Shane MP boards I have seen, this is the only fang tail (though I am by no means an expert on Peterson’s shapes). It’s also worth noting the Michael Peterson fang tail board was lightly restored, but is mostly original.

Australian surf history is filled with all sorts of colorful characters and talented people, and even in that tough crowd, MP stands out. The Shane MP board you see here is eye catching yes, and beyond the striking lines of the fang tail and the colorful deck, there’s a ton of great history.

Thanks again to Aaron for sharing the photos of this board!

Photo at the top of the page by Jack McCoy; originally found on Facebook.