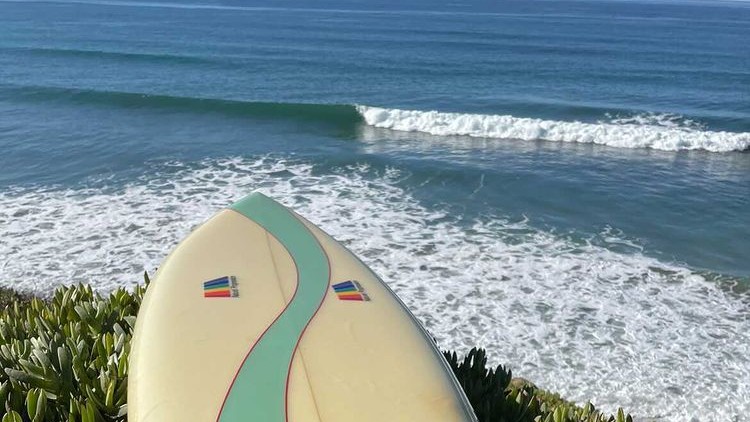 Greetings, Shredderz! Welcome to the very last board we will be featuring in 2020 — which, in case you missed it, was an absolute dogshit year. Hopefully writing up this rad vintage surfboard can be a palate cleanser for the previous twelve months. And I know I’m biased, but if this board doesn’t get you excited, then you’re probably looking in the wrong place for a little pick me up. Thanks to Steve at Surfside Projects for sharing photos of the pristine 1979 Natural Progression single fin pictured below.

Natural Progression is one of my favorite surfboard labels. First, NP boasted a pair of well regarded shapers in Robbie Dick and the prolific Phil Becker. (See here for a gorgeous Robbie Dick-shaped Natural Progression board I wrote up a while back.) LA has a fascinating surf history — from serving as the hub of the fledgling surfboard industry in the Sixties, to Zephyr’s emergence from the grit of Seventies’ Venice, to Malibu’s status as a California icon — and NP is definitely part of it. For my money, the Natural Progression logo is one of the coolest ever to grace a surfboard.

The board you see here measures in at 6’4″ x 20.5″ x 3″. I am told it has a ton of volume up front and towards the middle of the board. Based off the signature, I believe the board was shaped by Phil Becker in 1979. (Note: Becker did not sign his name to the board, but it is signed in a way that is consistent with other boards he has made. See here for another NP / Becker that has hand written numbers matching Becker’s handwriting.)

It’s a stunning board, and I am told it is all original. The sea foam green design looks like a tribute to Larry Bertlemann’s famous Pepsi boards. An earlier draft of this post had me ranting and raving for another 1,000 words about how cool it is that the red fin matches the pin line on the rest of the board, but I’ll spare you the details.

I’m also geeking out on what I am calling the fluted wings on the board. My terminology might not be 100% correct but you can see the details of the wings and the bottom contours in the shots above. (By contrast, see this Max McDonald board with elevated wings, which I think of as an inverted version of the wings setup on the NP.) Anecdotally, I can’t recall seeing too many Phil Becker boards with similar fluted wings. As always, if you have something similar let me know! I also really dig the swallow tail single fin combo, but for strictly aesthetic reasons.

Sharp eyed collectors may recognize the logo on this board as the slightly tweaked and updated version of the classic Natural Progression rainbow logo. (For a side by side comparison, here’s the original logo, and here’s the updated one. Both via the awesome Stanley’s Surf Logo Library.)

Thanks again to Steve at Surfside Projects, not just for sharing the photos and story behind the Natural Progression surfboard, but also for taking some photos that do it justice. It’s awesome to see this stick set against the backdrop of the Pacific Ocean, which is right where it belongs.