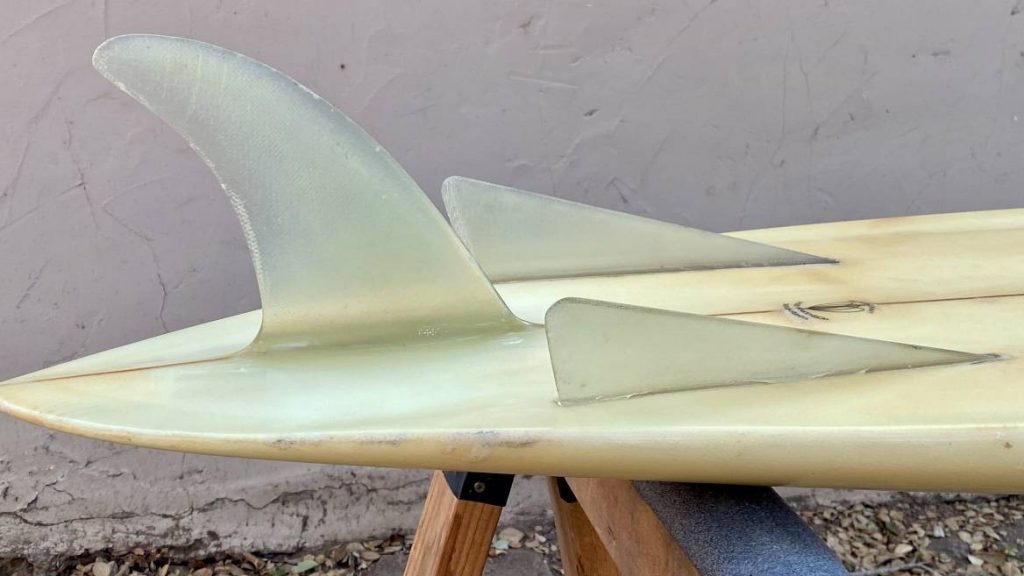 Greetings, Shredderz! Welcome to the latest installment of the Weekend Grab Bag. Today we’ve got a couple of sweet sledz for your viewing pleasure: a vintage Campbell Brothers bonzer, a Frank Latta-shaped Energy / Simon Anderson thruster, and a Nectar gun. Keep scrolling for the goods.

I always get a huge kick out of seeing vintage Campbell Brothers bonzers. I see way more vintage Bing Bonzers than ones produced under Malcolm and Duncan Campbell’s eponymous label. The seller believes this one was shaped in the Nineties; I’m not so sure. My guess is late Seventies / early Eighties. It’s interesting to compare the board above to a 1976 Campbell Brothers board I wrote up earlier. You’ll note the 1976 board has much more extreme concavr. Another small detail worth noting is the board was glassed by Santa Barbara fiberglass maestro Bob Haakenson. I can’t recall if I have ever seen a Campbell Brothers board glassed by Haak before. Finally, here’s a vintage Campbell Bros Russ Short Model bonzer, if you’re into that sort of thing.

Simon Anderson’s thruster design remains a staple in any high performance quiver decades after it was invented. I’m also a sucker for the gradient spray jobs you see on a lot of earlier Energy thrusters. This one is shaped by Frank Latta — see here for another example of an Energy Surfboards / Frank Latta stick. Simon Anderson originally licensed the thruster to Nectar Surfboards for the US release (as celebrated in this amazing ad.) I believe the example above is an Aussie board that must have found its way to the States at some point.

Last but not least we have a stunning 8’8″ single fin gun that was shaped in 1977 by Dennis Murphy. I don’t know much about Murphy, but this thing looks sick. Check out the multiple pin lines on the deck, the matching glass on fin, and the subtle logos throughout.