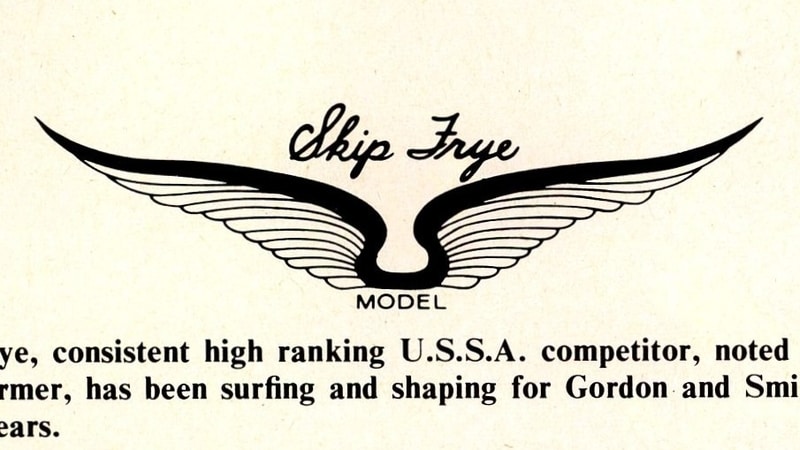 Greetings, Shredderz! Today we’ve got a Sixties ad for the classic Gordon & Smith Skip Frye Model. (For perhaps the cleanest ever G&S Skip Frye Model I have ever seen, check out this post from last year.)

I’m not sure exactly when the ad appeared, but it was early enough in Surfer Magazine’s history that the masthead for this issue listed Ron Stoner as the Staff Photographer. I would guess it was sometime between 1965 and 1968 at the latest. It’s fascinating to see the ad’s focus is on the slimmed down fin. In doing a very quick and dirty eye test, it seems like the fin on the G&S Skip Frye Model I referenced earlier looks just a little more refined than the template shown in the ad above. Same goes for a super early G&S Skip Frye Model I wrote up, which even pre-dates Skip’s famous wings logo. But who knows — this could just be obsessing over differences that don’t actually exist.

Later on, Skip would go on to design the New-E-Free template for W.A.V.E. Set fins, which probably went a step too far. Either way, it’s very cool to be able to trace the evolution of Skip’s various fin designs.

Thanks for reading and we’ll be back next week with more vintage surf ads as part of the Sagas of Shred series.