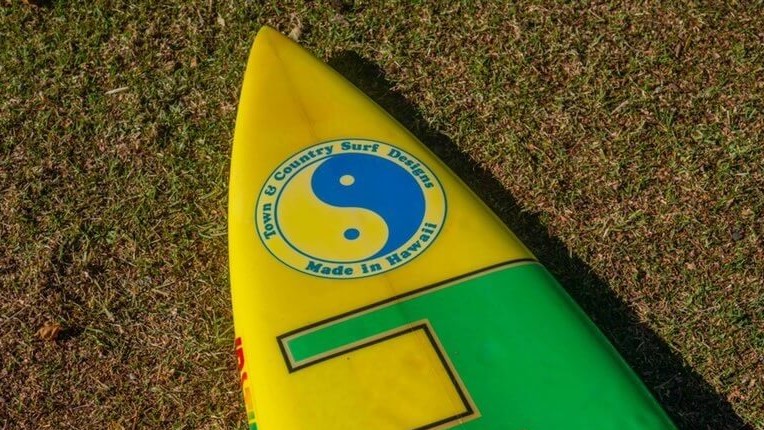 Greetings, Shredderz! Given the non-stop swell that has been hammering Hawaii’s North Shore lately, I figured I’d feature this board from one of the unquestioned greats of Hawaiian board building. Pictured here is a killer 1986 Ben Aipa thruster shaped for Town & Country. Many thanks to the man known as Shad for supplying pics; you can check him out on Instagram here.

The airbrush on the board was done by Gavin Hasegawa. Last year I wrote up another Aipa / T&C thruster featuring artwork by Hasegawa, which you can check out here.

The signatures on the board are exactly what you’d expect. The script handwriting matches other Aipa boards I have seen. Many of the T&C Aipas I have seen have a similar setup where Aipa signs his signature on the stringer, and then has an additional signature in block letters where he writes out the board’s dimensions. The “BA” and “86” are clear references to Aipa’s initials and the year it was shaped, which I verified with Duke Aipa, one of Ben’s sons. I’m not sure what the other numbers and letters above the stringer represent. If you look closely at Hasegawa’s signature, you can see he included a reference to the Pottz airbrush: “Nothing is ImPOTTSible!”

The T&C Aipa board also has a removable center fin and glassed on side bites, which seem to have only been popular during the Eighties.

Thanks again to Shad for sharing this rad Aipa board. I’m a sucker for all things outrageous and Eighties, and even more so when they have the serious street cred that a shaper like Ben Aipa provides.