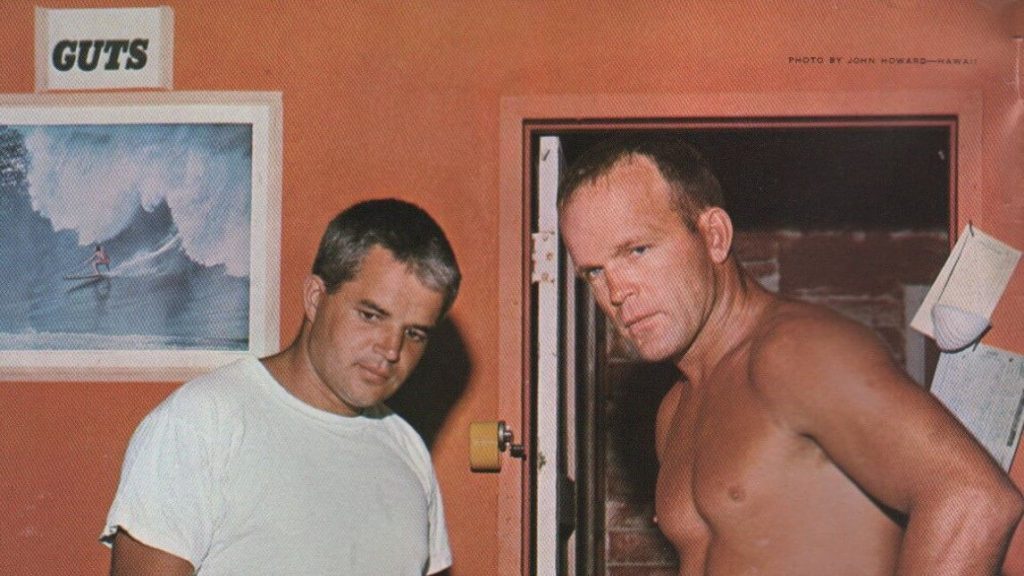 Does it get any more classic than this? Dick Brewer and Buzzy Trent, refining a surfboard made for waves guaranteed to terrify you, if not end your life outright. Brewer’s career is endlessly fascinating. His status as one of the greatest shapers ever is not for debate — and he still might be underrated! Beyond the accolades, Brewer’s career has had many fascinating twists and turns, which are documented in detail in his Encyclopedia of Surfing entry. I also highly recommend this Derek Hynd profile of Brewer, which originally ran in Surfer Magazine in 1990.

Pictured above is an incredible Hobie Surfboards ad announcing Dick Brewer’s move to the label. Brewer originally founded Surfboards Hawaii in 1961, but by 1964 he had lost control of the label. In 1965 Brewer was shaping at Hobie Surfboards, where he produced the Dick Brewer Model, which is regarded as one of the most coveted big wave boards of the Sixties. Brewer was no slouch in the surfing department either, and was an early Waimea standout.

I love the way Buzzy is inspecting the board, with the not-so-subtle “GUTS” sign taped to the wall. It’s clear these are people building serious equipment for a very serious job. Brewer shaped boards for Trent dating back to his Surfboards Hawaii days. I’m shocked at how young Brewer looks in the ad, as most photos I’ve seen depict him with a full head of grey hair, even early on.

By 1966 Brewer was shaping at Harbour Surfboards, one of many stops in a curiously peripatetic career. (My personal favorite is Brewer’s short lived Lahaina Surf Designs label, created during a stint in Maui; the acronym is not accidental, from what I understand.) I don’t know that I have seen a single Dick Brewer board shaped for Harbour, and I’d be curious to get the back story there. I also don’t know if Brewer shaped anything for Hobie Surfboards other than his eponymous model. According to the old (and still great) US Vintage Surf Auctions site, Hobie produced fewer than 100 Dick Brewer Model elephant guns. Brewer’s time at Hobie was brief but produced an all time classic Sixties big wave gun.

Thanks for reading and we hope to see you next Thursday evening for more Sagas of Shred!