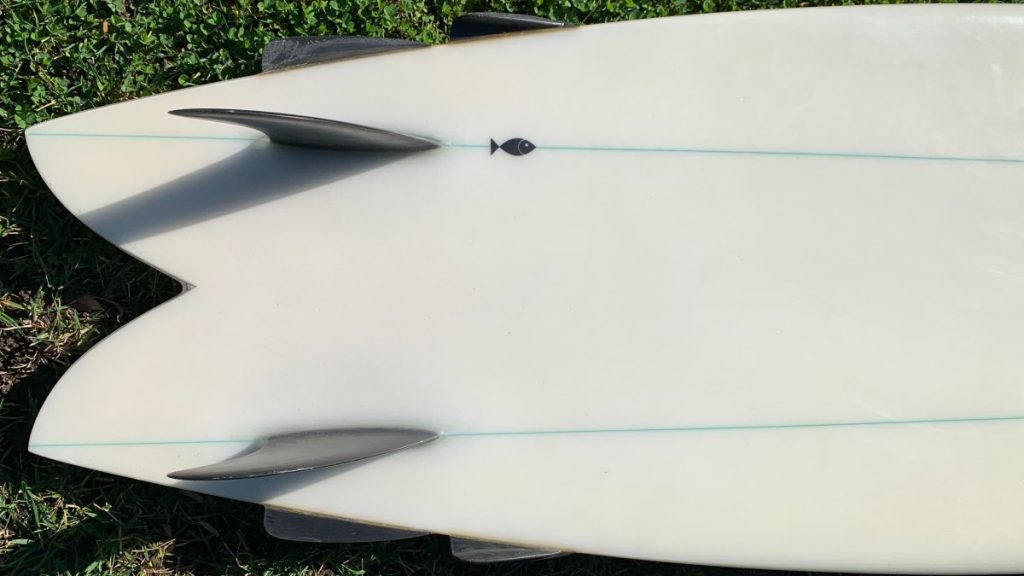 Greetings, Shredderz! Today we’ve got another Steve Lis surfboard for you, and this one just might take the cake.

Lis is credited with inventing the fish, which was inspired by high performance kneeboarding at some reef breaks in La Jolla. Given Lis’ contribution to surfboard design, you would think there would be more information on his career available online, but the only good resource I could find is his Encyclopedia of Surfing entry.

And while I can’t tell you much about Lis, there is a man who can: Eric “Bird” Huffman of Bird’s Surf Shed. Bird and Lis have a shared history in the Sunset Cliffs kneeboarding scene that eventually gave birth to the fish.

In the Instagram video above, which Bird posted earlier in the year, he showcases an unusual Steve Lis fish and refers to it as “one of the finest ones he’s ever seen.” This is not a statement I take lightly, considering Bird’s surfboard knowledge in general, as well as his first hand experience with Lis and company.

Needless to say I was thrilled when the new owner of the Steve Lis fish Bird featured reached out with some photos. It is one sick sled.

Per Bird’s description in his video, the Steve Lis e-wing fish belonged to Larry Gephart. Gephart invented the wooden keel twin fins that are found on many fish. Curiously enough, the Lis fish does not have a set of Gephart fins on it. You can find Gephart’s fins on the True Ames site, but like Lis, Geppy seems to keep a low profile. He shapes boards, too. If I’m not mistaken, in Bird’s video, he mentions the outline is one of Gephart’s. On a side note, it feels like Gephart is also deserving of some more attention given the impact of his fin designs.

There are almost too many details about the Steve Lis e-wing fish to cover in depth. First, it just looks cool, starting with the unique stringerless design and the twin blue glue lines, down to the black high density foam fins, and the logos throughout.

Perhaps the most striking aspect about the Lis fish are the unique wings that appear towards the tail. Bird refers to them as e-wings. As far as I can tell, they don’t bear any relation to Max McDonald’s elevated wing design. The wings are tricky to describe, and I’m sure I’m butchering the terminology, but you can see the wing closer to the nose has a piece that extends straight downwards, perpendicular to the bottom of the board. I can’t think of any other board I’ve seen with a similar design, with on exception (more on that below.)

As mentioned in Bird’s video, the high density foam fins on the Lis e-wing fish were actually designed by Stanley Pleskunas, who was another member of the Sunset Cliffs crew.

The other thing that blows me away about the Lis fish is that it is a nearly identical shape to a Skip Frye fish posted by Richard Kenvin of Hydrodynamica.

As you can see, Kenvin has shared photos of a Skip Frye long fish with a striking number of similarities to the stringerless Lis. I believe the photos originally appeared in Kenvin’s “Surf Craft” book, but don’t quote me. Both boards are 6’9″ and have the same e-wings. Kenvin says the 2004 Skip longfish is a collaboration between Frye, Gephart and Stanley Pleskunas; I’m assuming it has the same Pleskunas-designed high density foam fins that Bird outlined in the first video. I have to assume that the Skip longfish and the stringerless Lis fish are somehow sister boards given all the similarities.

Thanks again to the owner of the Lis fish, who was kind enough to share the photos you see here.