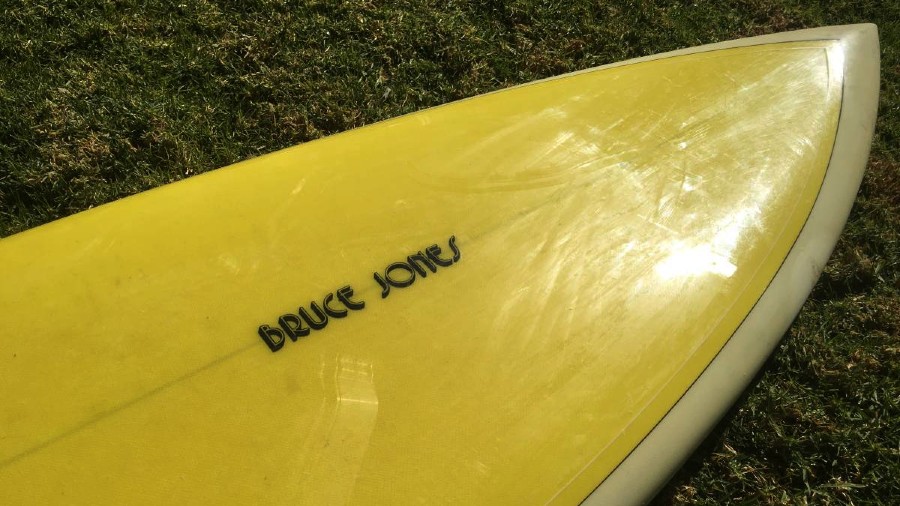 Greetings, Shredderz! Welcome to the latest installment of the Weekend Grab Bag. See below for two sick little Seventies shapes that are currently listed for sale.

I’m always intrigued any time a Bruce Jones board pops up for sale. Sadly, Jones passed away in 2014. Before his passing, though, Jones was part of the Russell Surfboards / The Brotherhood crew in the Seventies, which was also home to folks like Mike O’Day, Jeff Timpone and a young Shawn Stussy. In fact, Stussy not only credits Jones as having been an early influence, but it was Jones who helped Stussy get his job at The Brotherhood. The rest is history. Stussy also considers Jones and none other than Mike Diffenderfer as the best balsa surfboard shapers, which is pretty rarefied air.

Anyway, the board above is a Seventies Bruce Jones single fin and it measures in at 6’10”. The seller is asking $300, which I think is a great price, especially considering the fin that comes along with the board.

I love the Bruce Jones logo — it’s so clean and simple and striking.

This Unity Surfboards single fin has been beautifully restored. The last Weekend Grab Bag featured a neat Unity kneeboard that was also fixed up. The more I compare the two Unity boards, the more I wonder if it wasn’t the same person who did both restorations. I don’t always love the look of restored boards — the super bright whites sometimes strike me as artificial-looking — but I thought this one was original until I re-read the listing closely.

The board comes with its original Brewer template fin, which is always a nice touch.