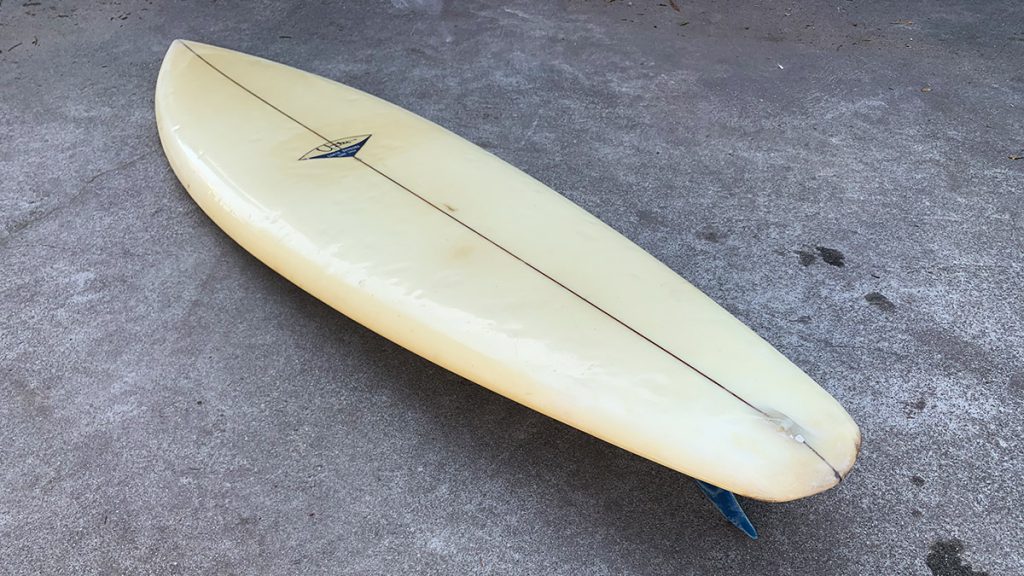 Greetings, Shredderz! Today we’ve got a stick from my personal stash. Featured here is a 1970s Renny Yater single fin, hand shaped by the man himself.

First things first: you can tell it’s Renny hand shape thanks to the signature on the deck, right below the classic logo. (Note: I believe later versions of the logo replaced “Santa Barbara Surf Shop” with “Santa Barbara California.”) Renny was known for signing boards with a simple “Y” centered on the stringer, and a four digit serial number beneath. Yater’s label employed other shapers dating back to the 60s, so it’s cool to know this one was shaped by Renny.

A more knowledgeable friend estimated that the Yater might have been shaped in the mid-70s. The boards dimensions are roughly 6’3″ x 20″ x 3″. This strikes me as being a bit on the short side for a 70s single fin, but I’d be curious to get other opinions on this point.

Likewise I’m not entirely sure how to best describe the tail. My best guess is a rounded diamond tail or a thumb tail, or something in between the two.

Most of the foam is towards the center and front of the board, with a bit of a beaked nose.

The board has down rails throughout, although it’s hard to see in the photos.

Likewise, the fin seems a bit on the small side. It measures in at 7″ from base to tip. I am no expert on fin sizes, but anecdotally speaking, the fin on my Yater seems a bit shorter than ones I’ve seen on comparable 70s single fins. I don’t know if it’s the original fin on the board.

Overall the Yater is in pretty good shape. I found it on Craigslist somewhere in the Pacific Northwest, where it had been stashed away for a bit. There are a bunch of pressure dings on the deck, and it’s nice to know the board was ridden (and hopefully enjoyed) for some period of time. I got some basic repairs done, but overall the board didn’t need anything extensive. The work was done by Rich Wood in Pacifica, who also replaced a hideous glassed on leash loop with something way better. There are some surviving older repairs on the Yater, but it has been so long I don’t even remember which ones are which.

I haven’t surfed it yet. It’s on the long (and growing) list of boards I need to try soon, although I find myself sticking to a handful of boards that I’m trying to get dialed. I’d love to learn more about the origins of the Yater single fin, what kind of waves it was designed for, and how, if at all, the assumptions behind the board’s design have changed since then. I figure the board was crafted with Rincon’s long, perfect walls in mind.

I’m really stoked I scored one of Renny’s boards, given his stature as one of California’s pre-eminent shapers. That said, while I love collecting boards and learning about the history behind them, they ultimate test comes in the water. At some point I’ll be dusting off this thing and taking it for a spin. And if not, I’ll be passing it on to someone who will ride it and use it for its intended purpose — laying some tracks on some beautiful waves.