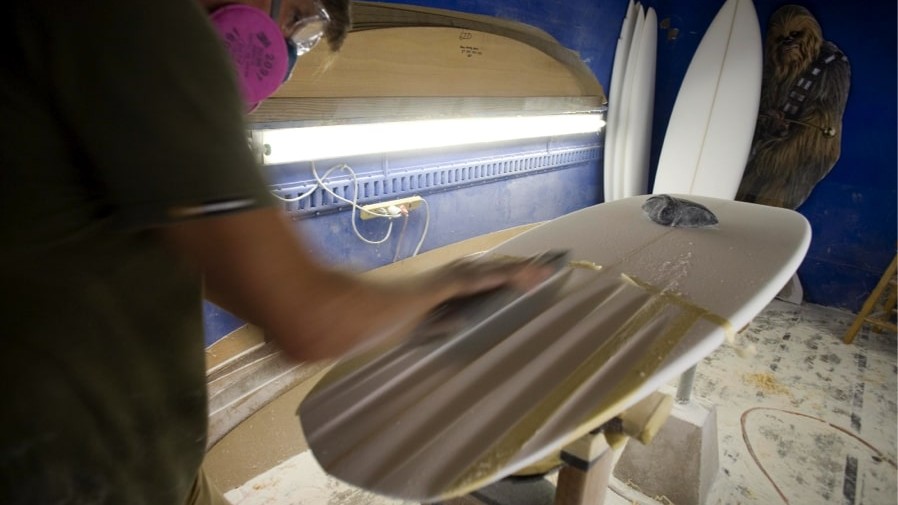 It sounds strange, but this blog owes its existence to Craigslist. I started writing Shred Sledz because it was impossible to find information online about the shapers and surfboards I was interested in. I realized Craigslist consistently had great pictures of interesting surfboards, but what made it inconvenient was the fact photos disappeared as soon as a board changed hands. From there, it was fairly straightforward to save pictures of interesting boards I saw, do a little research, and then post them online to share with like minded people. And thus the world’s lowest budget surfboard site was born.

And while Craigslist isn’t the main focus of the blog these days, it still comes through with some absolute gems from time to time. Take the board pictured above. It’s an 11′ Makaha Missile shaped by Dave Parmenter currently listed on Craigslist in Hawaii. Parmenter is a master shaper, and any of his boards are worth geeking out over, but the Makaha Missile has a particularly cool back story.

According to the Craigslist listing, Parmenter detailed the history of this specific Makaha Missile in a blog post titled “Jurassic Clark“. I highly recommend reading the post in its entirety. We all know of Parmenter’s shaping pedigree, but he is an incredible writer, as well. Surfboard manufacturing is far from glamorous, yet Parmenter’s writing takes you along on an epic quest to craft a surfboard out of a rare Clark Foam blank.

According to Parmenter, the board was shaped out of a 113D Clark Foam blank. I have a PDF of an old Clark Foam Catalog, where I was able to find the description of the 11’3″ blank below.

Note that the Clark Foam catalog refers only to the 11’3″ blank itself; I believe the 113D refers to the rocker modification described in the “Rockers” section. I was surprised to learn the 113D was introduced as recently as 1990. If I had to guess, George Downing and Dale Velzy developed the design principles for the blank well before then, but I can’t say for sure.

The Craigslist post describes the board as a Makaha Missile. Parmenter’s site only lists a Makaha Machine model; the only Makaha Missile I’ve seen is on The Big Slide blog, but it’s signed by Parmenter, so we know such a thing exists. Regardless of the model name, the board was inspired by an all-original 11’6″ Dick Brewer Bing Pipeliner that Parmenter owns.

Parmenter’s post has some fascinating background on the board. First of all, the Clark Foam blank was made from a rare high density pour. The blank itself weighed more than 50 pounds before it was even glassed. It also had a custom stringer glue up, with two substantial offset 5/8″ t-band stringers made of basswood sandwiched between two layers of redwood.

In the photos above, which are from the original Jurassic Clark post, you can see the custom Clark Foam 113D blank on its own, and then alongside Parmenter’s aforementioned 11’6″ Dick Brewer Bing Pipeliner. I didn’t realize the Pipeliner was ever produced at this length.

You can see just how insane the offset stringers are. Parmenter had to use a Japanese-style pull saw to cut out the planshape from the blank, and shaping the board required an older planer outfitted with blades, thanks to the higher density foam and the stringers.

Curiously, the Jurassic Clark post doesn’t include any photos of the finished board. I have no way of proving that the Makaha Missile in the Craigslist post is the same one described on Parmenter’s blog, but I’m reasonably sure this is the case. For starters, it would be a very strange and obscure thing to counterfeit; more to the point, though, the stringers on the Craigslist post look like they’re the same ones that Parmenter featured.

And while figures like Parmenter, Dick Brewer, George Downing and Dale Velzy get all the credit, let’s hear it for Craigslist, the humble unsung hero of surf history. Check out the listing for the Makaha Missile here.