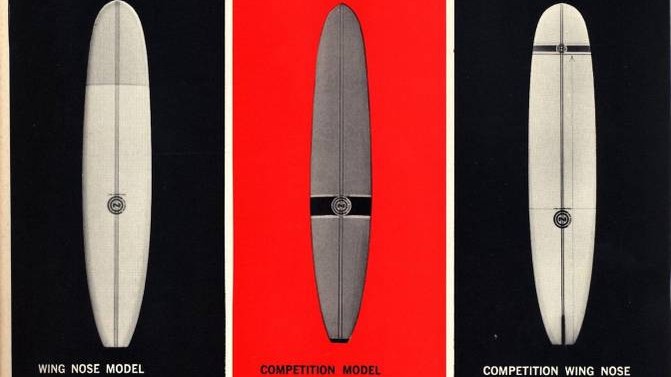 There are two other interesting tidbits in the ad. The first is what Con referred to as the “multi-board” feature. I think of it as Con’s version of The Morey-Pope Trisect, now known as the Pope Bisect. The Morey-Pope Trisect was the first collapsible surfboard, which could be broken down into three distinct pieces for easy traveling. Incredibly, there’s a video from the 60s featuring Tom Morey taking a Trisect down to Mexico and then riding it:

The second interesting part of the ad is the mention of removable polypropelene fins, which were available as an extra feature. I’m not sure if this fin system was used in other brands during a similar time period, but it looks vaguely familiar. Honestly I always mix up all these old fin systems anyway, so I might not be the best person to ask. I love the simple, bold design of these vintage ads, and Con has always been a favorite label, so there’s a lot to like here. Thanks again for reading and we’ll be back next Thursday evening with more Sagas of Shred!