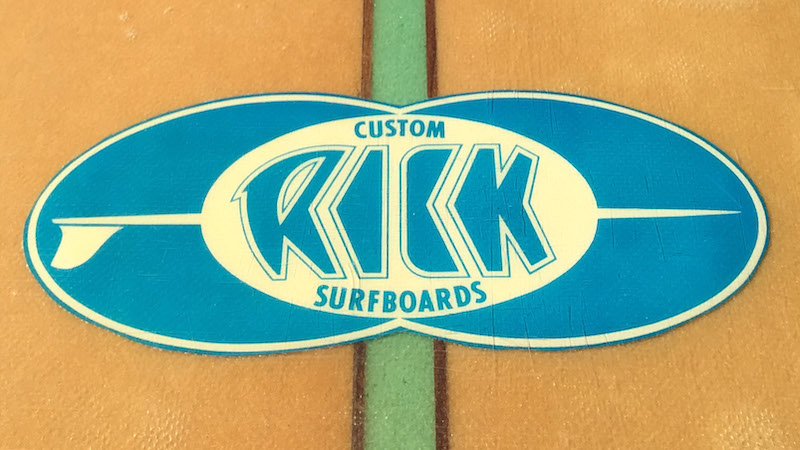 Greetings, Shredderz! Today we’ve got a submission from longtime reader Russell. Follow him on Instagram here. The board featured below is a 60s Rick Surfboards longboard.

I’m sure there’s someone out there who can date this board better than I can. All I can say is it’s from sometime in the 60s, and almost certainly before the Transition Era. Yeah, I should know this stuff better, but I figure the internet is in no danger of running out of know it alls anytime soon.

I’ve long been fascinated with the Rick Surfboards label. Bing Copeland and Rick Stoner got their start with the joint Bing & Rick Surfboards company, before going their separate ways. Bing Surfboards is better known, but Rick boasts an incredible history of its own, thanks to team riders like Barry Kanaiaupuni and Dru Harrison, and a series of famous models, like the aforementioned riders’ signature shapes, and the UFO.

I’m also not sure who shaped these earlier Rick boards. I believe Rick Stoner shaped surfboards, and Phil Becker was behind some of the better known models in the Rick lineup. According to Mike Purpus, Becker developed Rick’s UFO, the Barry Kanaiaupuni Model (I believe the first one, which was a 60s longboard shape; not sure if this is also true of the Transition Era BK Mini gun) and the Dru Harrison Improvisor. Curiously, Paul Gross’ excellent displacementia blog has an account from an old Rick production shaper, attributing the UFO to a polisher in the factory at the time. Many of these early Rick boards were unsigned, and so it’s impossible for me to say who might have shaped them.

This particular 60s Rick longboard is beautiful. It has obviously seen some use over its lifetime, but I personally don’t mind that at all. I love the logo placement, with the larger laminate towards the board’s hips, and the smaller one at the nose. The green high density foam stringer is great, too. I imagine it must have looked insane when the board was brand new. The 60s Rick longboard measures in at 9’7″ x 22″ x 3″.

The other thing I associate with Rick Surfboards is its status as one of the premier surfboard labels of Los Angeles’ South Bay. When Phil Becker passed away earlier this year, I wrote about how I couldn’t help but see his passing as an emblem of the surf industry’s continued retreat from the South Bay, which was once the beating heart of the surf industry. On the other hand, I love the fact this Rick longboard still resides in the greater LA area. It’s amazing to think this board could have surfed the same spots over a span of nearly 60 years, bearing witness to decades of change in one of America’s great cities.

Thanks again to Russell for sharing photos of this killer Rick Surfboards sled!