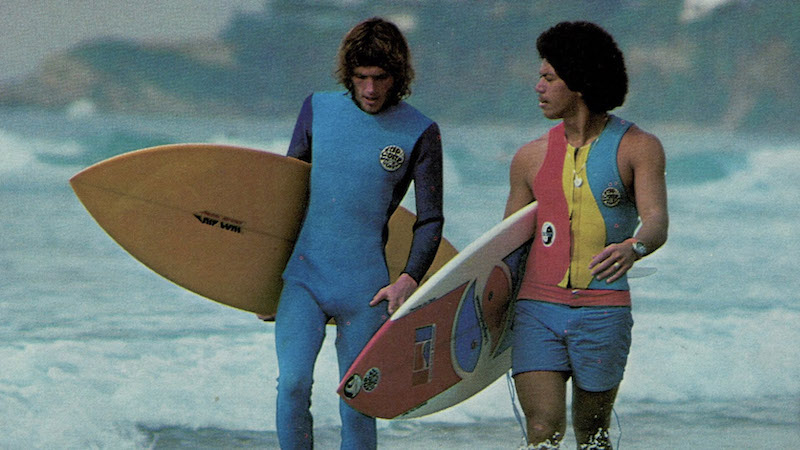 Greetings, Shredderz! Today we’ve got a real doozy for you: a Rip Curl ad from the July 1978 issue of Surfer Magazine featuring Wayne Lynch and Larry Bertlemann. I had seen various scans of this ad floating around online, and it bummed me out that no high quality versions seemed to exist. A few months ago someone contacted me asking me if I knew of the ad. I said that I did, and that if I ever managed to scan the ad myself, I would definitely send it his way. Later on the same reader ended up having his son scan the ad and clean it up, and he was generous enough to share the pic with me. The reader doesn’t want any credit, so I won’t be using his name, but needless to say I’m pumped to share this high quality version of the ad.

I just love the pairing of Lynch and Bertlemann, and the fact that despite being two of the most memorable surfers of the 70s, they had such different styles. The ad perfectly demonstrates this contrast, too: Lynch is low key in a standard wetsuit and a sleek looking single fin with minimal branding. On the other hand, Bertlemann’s signature flamboyant style is on full display: I love the colorful sleeveless top, and of course, the full on Pepsi airbrush on his board. I’m dying to know what these two were talking about, and how they got along. The photo, despite its relative simplicity, raises a lot of questions the longer you look at it.

It’s unclear to me where the photo was taken. The text mentions the 1978 Katin’s International Challenge in Huntington Beach, where Larry Bertlemann and Wayne Lynch finished in first and second place, but that doesn’t look like the location to me. It’s a bummer no photographer credit is included, either. As always, hit me up if you know.

Thanks again to the reader who submitted this killer ad. And if you have additional gems featuring either Larry Bertlemann or Wayne Lynch, I’d love to see ’em. Sagas of Shred will be back in a week with more vintage surf ads for your perusing pleasure!