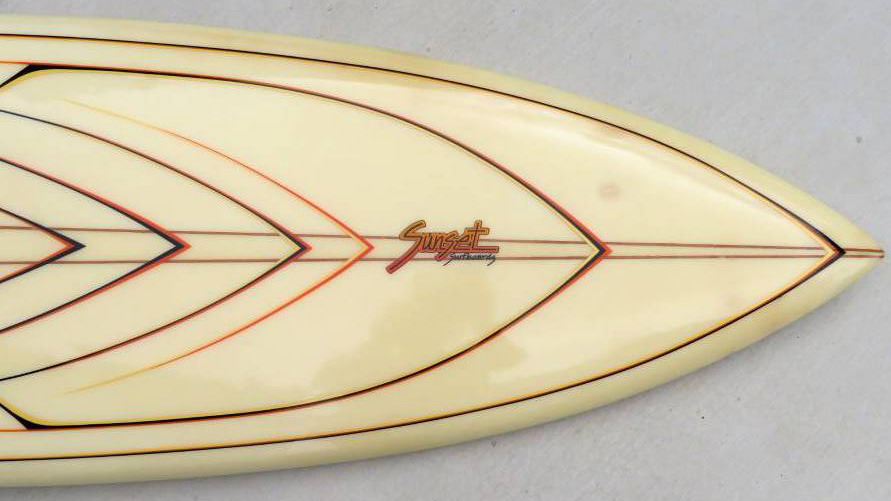 Greetings, Shredderz! Today we’ve got a ridiculous piece of craftsmanship for you to all admire. Pictured here is a 7’6″ Sunset Surfboards single fin that was briefly posted for sale on Craigslist over the weekend.

Sunset Surfboards has quietly had an enormous influence on San Diego surfboard builders. The board above doesn’t need any explanation, thanks to the utterly insane resin pinlines. This is definitely one of the more impressive boards I’ve seen when you think about all the effort involved — to say nothing of the execution! I won’t even bother to count but I could stare at the closeup for hours. I’m wondering if the pinlines were the handiwork of Peter St. Pierre, who also goes by Peter Pinline, but that’s a guess.

The board is in pretty good shape considering its age. It must be from the 70s sometime, maybe towards the second half of the decade. At an absolute minimum it’s north of 40 years old, and still looks very rideable.

And yes, while the board looks really cool, Sunset Surfboards is a label that is admired by many in-the-know San Diego surfers. Sunset Surfboards and the legendary crew at Moonlight Glassing have overlapping origin stories. Peter St. Pierre AKA @tapedoff, who founded Moonlight, helped build many early Sunset boards. JP St. Pierre, Peter’s son, founded Surfy Surfy, which was heavily influenced by the Sunset shop in Encinitas. Joel Tudor’s website speaks to his father’s longtime collaboration with Sunset shaper Bill Shrosbree. It’s amazing how these stories and people continue to connect and reconnect throughout the generations. Sunset was founded by Ed Wright, and it counted Bill Shrosbree, Syd Madden, Pat Flecky, Brian Fredrickson, Tim Bessell, Ned McMahon, Rusty Preisendorfer, Mike Croteau and Michael Willis (one half of the Willis Brothers) among its crew of shapers.

I believe Sunset is still owned by Brian Fredrickson, though I’m not sure on how you might order a board. For more on Sunset’s history, check out this article that was written by Chris Ahrens and published in The Coast News.