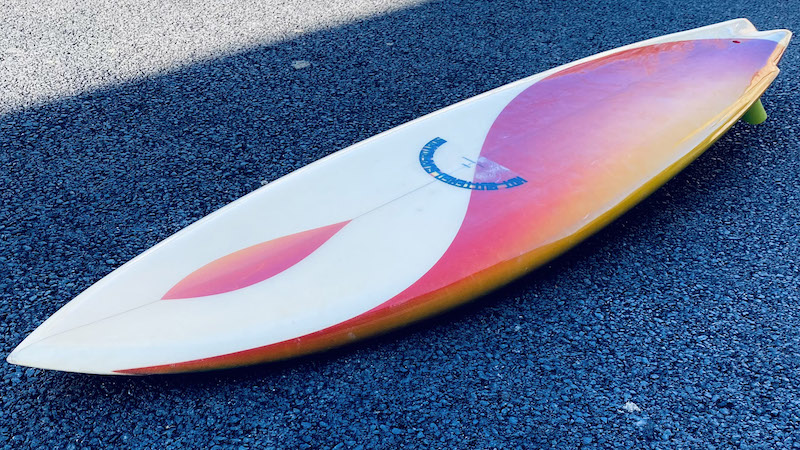 Greetings, Shredderz! Today we’ve got a killer duo of Hot Buttered Surfboards. For my money, Hot Buttered is one of the coolest Aussie surfboard labels ever. What else would you expect about a brand invented by the guy known as “The Sultan of Speed?”

The boards in this post are courtesy of Jason Burnett of Jay Surfboards, out of Edinburgh, Scotland. I’m kind of amazed that not one but two killer vintage Hot Buttered boards ended up in the UK, but I’m certainly not complaining. Give Jay a follow on Instagram. He makes some beautiful hand shaped surfboards.

Neither of the two boards featured below were shaped by Terry Fitzgerald, who founded Hot Buttered. Personally, I love learning about the people behind the scenes who were often instrumental to the success of surf brands, whether it’s glassers, under the radar shapers, or anyone in between.

Unfortunately, I haven’t been able to find much information about Frank online, but there’s an article written by Terry Fitzgerald on the Hot Buttered website that refers to Frank as the label’s longtime production shaper. Anecdotally, I’ve also seen a lot of Hot Buttered boards that were described as being shaped by Williams. Fitzgerald was definitely the driving force behind the brand, but I get the sense that Williams was actually shaping many of the boards while Terry tended to his pro surfing career. It’s a shame that Williams’ story hasn’t been told anywhere, but maybe that’s fodder for a future post.

The other thing that stands out about the Hot Buttered Frank Williams twin fin is the amazing airbrush. I can’t get enough of the contrasting sprays on the deck and the bottom.

The second Hot Buttered board illustrates another interesting chapter in the label’s history. I have long been fascinated with Aussie surf culture, especially as an American. The Australian and American surf scenes are practically mirror images of one another — the countries are even located at opposite ends of the Pacific on either side of Hawaii. Hot Buttered is definitely more famous in its native Australia, but it’s also one of the few Aussie surfboard brands that made its way to the States.

The Hot Buttered board pictured above is a thruster shaped by Hank Warner out of San Diego. Warner has been shaping the US licensed Hot Buttered boards since 1977, and he is still shaping them today. Warner clearly spent a little bit of time in Australia — check out this Instagram post, which hints at time spent in Byron Bay riding local shapes — but I don’t have the full story. Warner has made references on Instagram to the fact that his HB boards are often shaped using Fitzgerald’s original templates.

The Hank Warner-shaped thruster measures in at 6’6″ (rest of the dimensions are unclear). It’s gotta be an 80s board, maybe early 90s at the latest. I’m curious who might have done the absolutely killer airbrush. Tom Curtiss, also based out of San Diego, sprays a lot of Warner’s current boards, but I can’t say for sure if he did the one you see above.

The 80s boards shaped in the US feel very different from the classic 70s Hot Buttered single fins, but they’re awesome, too. And of course you know I love me a fine set of glassed on fins.

Thanks again to Jason at Jay Surfboards for sharing pics of these stupendous sleds!