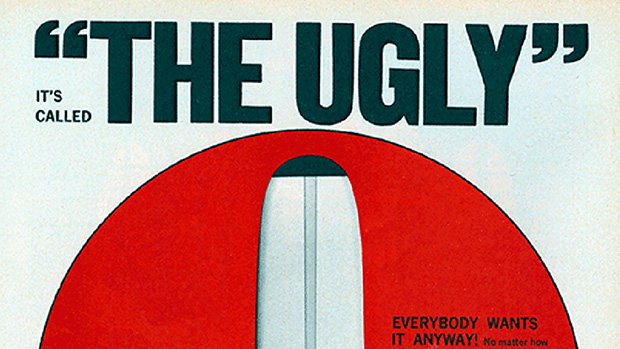 For starters, I love the graphic design in the ad. A lot of these 60s ads are striking in their simplicity, and while I’m generally not a fan of constantly yelling “they don’t make ’em like they used to!”, I do think we could learn a thing or two from these clean layouts and strategic use of color. The copy is great, too. I mean, what else can you say about an ad that proudly refers to its product as the “ugliest board ever built.” I had heard of Con’s Ugly model before, but this ad also sheds some light on the history behind the model, which was developed with Bob Purvey. I love how Purvey’s noseriding time stats are given as proof of the Ugly’s functionality. For more evidence, check out this scene from MacGillivray Freeman’s “Follow Me”, featuring Purvey riding an Ugly model with beautiful style (it’s behind the Encyclopedia of Surfing paywall, hopefully you are already a subscriber). Also, for all the talk about the Ugly’s looks, I actually think it’s pretty easy on the eyes!