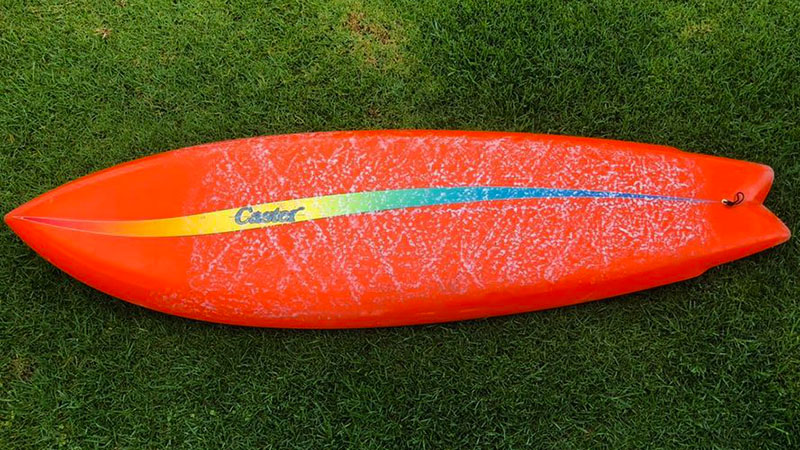 Greetings, Shredderz! One of the best parts of writing this blog is seeing all the boards and stories that get sent in from folks. Shred Sledz would have some seriously slim pickins if it weren’t for the submissions I receive on a regular basis. If you have a picture of a rad board that you’d like to send it, you can email me or DM me on Instagram. I read all of my messages (I wish I could say I respond to them promptly, but hey, we’re all working on something, right?) and it’s always awesome to hear from people. A few weeks ago I wrote up some recent submissions, and this will likely become a regular series, given the cool stuff you guys send me! This time around we’ve got some heat, if I say so myself, including a gorgeous Bill Caster single fin, and a pair of really cool twin fins. Keep reading for the full lowdown.

I was sent this 70s winged Caster single fin a while back. I posted it to Instagram, but the board is definitely worth a revisit. Bill Caster passed away decades ago, but his influence still reverberates throughout the San Diego surf community. Photos courtesy of @therealhousehusbandofmaui. I love the outline on this board, and every time I look at the photos I can’t believe how hard the rainbow swoosh pops against the red tint.

Thanks to @benbagofdonuts for sending over this beautiful Surfing’s New Image Aipa twin fin. The vast majority of SNI / Aipa boards that I have seen and/or featured on the blog are versions of Aipa’s signature sting design. I believe this is an example of one of Ben’s swing twin fins. See this post from Ben’s son Duke Aipa, which features some other Aipa swing twin fins. I can’t really tell from the angle of the photos, but I’m willing to bet the board sports some pretty insane double concave in the tail.

By contrast, here’s another Aipa twin fin that I wrote up a while back, which was actually shaped for a teenage Luke Egan! Egan’s twin fin has what Aipa called a spade tail, versus the swallowtail on the Surfing’s New Image board. I love being able to compare these two different Aipa twins side by side.

Thanks to Jeremy for sharing photos of this beautiful vintage Shapes and Hulls twin fin fish, complete with a signature Jack Meyer dolphin airbrush on the deck. Jeremy is Jack’s son, and it feels great to play a tiny part in helping the Meyer family document Jack’s incredible artwork.