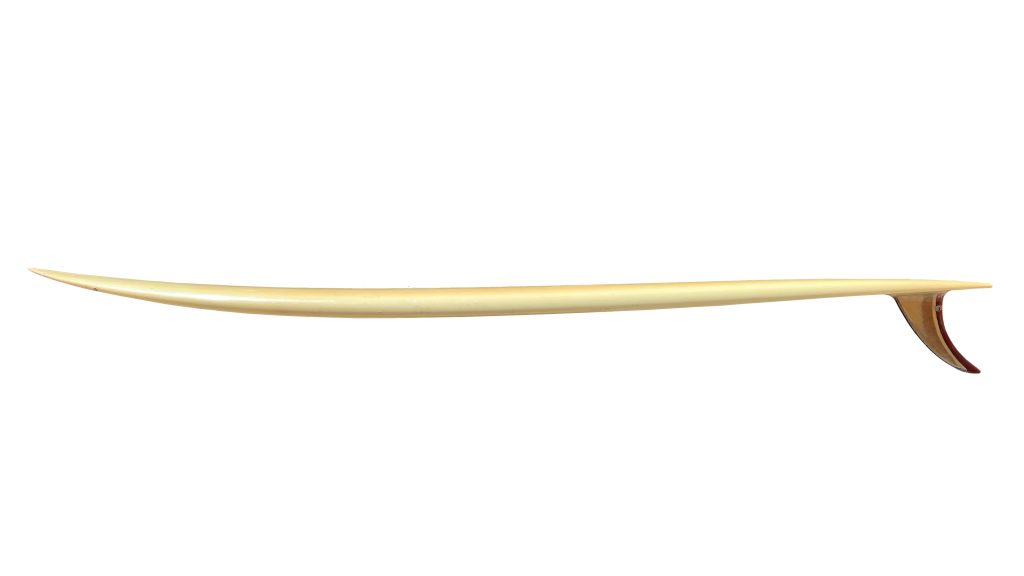 Greetings, Shredderz! Today’s post covers a bunch of topics near and dear to my heart: surf history, craftsmanship, board design, and travel, all expressed in the form of a single surfboard. Pictured here is a beautiful 70s Natural Curves surfboard shaped by Santa Cruz shaper Steve Coletta. This particular surfboard, however, was actually made for a wave located thousands of miles south of the Monterey Bay. The board is a Petacalco gun, named and designed for a wave located in the state of Guerrero in mainland Mexico. Sadly, the wave no longer breaks, due to a dam and some industrial development in the area. By all accounts it was a world class spot during its heyday. The Natural Curves Petacalco gun you see here has survived over the decades, and among other things, it is a tangible reminder of the time when Petacalco drew surfers to the Mexican coast in search of one of the best waves on the planet.

I first saw the board about a year ago, listed for sale online. The pictures were crappy, but I was intrigued by the outline of the board, which was unlike anything else I had seen. After some back and forth with the seller, and realizing the board was shaped by Steve Coletta, I decided to drive and pick it up. It was cheap enough to take a flier on, and more than anything else, my curiosity was getting the best of me.

I bought the board and sent some pictures to Coletta, who was kind enough to share some details. Thank you to Steve Coletta for providing some information and pointing me towards many of the resources I used to write this post. Back in the 70s, when Petacalco was still unknown to most of the world, Coletta was part of a crew of surfers in on the secret. The board’s design is based off shapes created by another Petacalco surfer named Pat Tobin. Tobin originally hailed from Laguna Beach, but relocated to Mexico, where he was one of the standouts of the small crew of expats surfing Petacalco. Check out this excellent Surfer’s Journal article for more info.

I am torn about how to depict Tobin. I don’t think there’s any dispute that he was one of the top surfers at Petacalco. But even those who liked and respected Tobin freely acknowledge that his tactics were aggressive. I don’t expect this blog post to reframe the age old debate around localism, but personally, I am uncomfortable with the idea of one transplant claiming local status over others. And yet people are complicated. Tobin was also an artist who painted landscapes, and there’s another Surfer’s Journal piece that finds Tobin in a reflective mood. Similarly, this tribute that appeared in Surfer Magazine upon Tobin’s passing depicts a person that sounds like someone I’d like to meet.

In any case, it’s very cool to see a Petacalco gun modeled after Tobin’s self-shaped quiver, still in great shape all these years later. The Natural Curves gun was made sometime in the 70s. It is around 8’9″ long. According to Coletta, this places the board on the shorter side for Petacalco guns, which could often measure north of ten feet. The Coletta gun is substantial, with a heavy glass job that signals it is a tool built for a specific — and difficult — job. You don’t need to know anything about surfboards to know this thing was made for waves of consequence.

I am fascinated by the lines of the Steve Coletta Petacalco gun. As you can see in the photos directly above and below this paragraph, the rocker is a trip. It’s reminiscent of the S Decks you see on many Transition Era boards, but exaggerated in part by the abrupt square tail on the board, and the thick wooden tail block that caps it. From certain angles it almost looks like there’s a big hump on the tail.

The outline is inspired directly by the boards Tobin built for himself. In one of the aforementioned TSJ pieces, Gerald Saunders describes one of Tobin’s boards: “[T]he wide point was about 18 inches back from the nose. Pat decided to complete the outline with a snapline. Consequently, the template was straight as a string from the wide point to a 6-inch squaretail. I think the board was about 9’6″ long and was glassed with a bunch of scraps he had scrounged up from somewhere. He rode that board every day and was untouchable in the water.” The squaretail sounds very similar to the Natural Curves board featured here. I’d also say Coletta put more curve into the planshape, judging from Saunders’ description of Tobin’s boards.

Sadly, I haven’t seen any other examples of these Pat Tobin-style Petacalco guns anywhere. I was only able to find one photo of a similar board, which you can see below. Mike Wellman was another member of the Petacalco crew. I don’t recall where the photo was originally published or who took it, so if you have information please let me know. I also was able to find a cool YouTube video with some early Petacalco footage. It’s hard to get a good look at the boards in the video, but they do seem similar to the Coletta gun featured in this post.

Last but certainly not least, I also wrote up a different Natural Curves Steve Coletta single fin about two years ago. I dig the contrast between the Petacalco gun and the other Coletta board I wrote up.

The other Natural Curves is also a 70s board, but it’s much more of a classic single fin from the era. I think the two boards look awesome together, especially when comparing the acid splash and pinlines on the blue board with the stark simplicity of the Petacalco gun. It’s rad to see two very different shapes made by the same person. Coletta has since moved down to Mainland Mexico, but I’m hoping to get both of these boards in front of his son Kalu, who is still shaping in the Santa Cruz area. If Petacalco ever comes back to life it’d be incredible to see someone ride the gun in the kind of waves for which it was created.

The Natural Curves Petacalco gun is a stunning object. It is an arresting shape that is evident even to those who don’t care about surfing, and it was clearly built by a talented craftsman. But what makes the board special is the way it expresses so many stories in just one simple form, whether it’s the tales from a world class wave that left an indelible impression on the small crew that surfed it, or as a testament to Steve Coletta’s long shaping career, with a nod to Pat Tobin, who pioneered the design. I’m thrilled I was lucky enough to find this thing, and while I’m not going to surf it, I’m glad I could at least capture some of the context behind this exceptional sled and share it with you all.