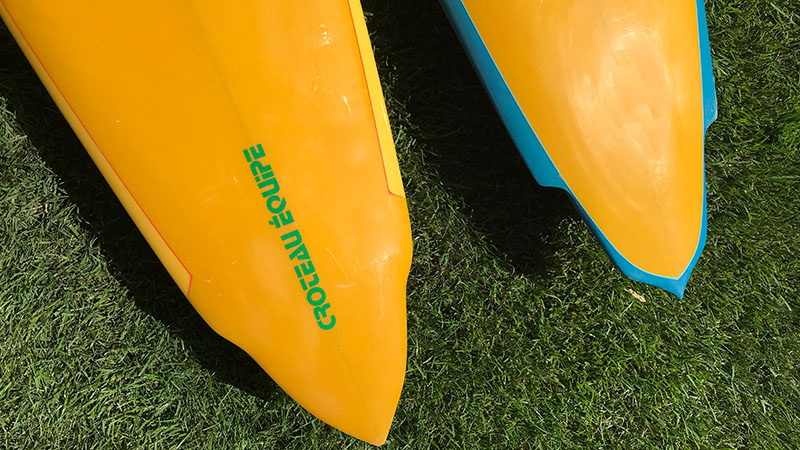 Greetings, Shredderz! First, a little back story: over a year ago I spotted a Mike Croteau surfboard listed for sale. It was a very cool board, but it was located far away enough to make pickup a huge hassle. I passed and posted about the board on Instagram instead. In the months that followed, though, I found myself thinking about the surfboard. I have long been fascinated with Croteau, who, despite earning respect from shapers like Rusty Preisendorfer and Steve Coletta, remained an underground figure to most surfers. More than that, though, I couldn’t help but think about the board itself. I just loved the shape and the colors, and it had been in such insane condition. I figured I would never see it again.

I was surprised when a gentleman named Marc — follow him on Instagram; he posts some great photos of rad boards — contacted me saying he had found the Mike Croteau single fin I had posted about. I told Marc I still regretted not buying it, and that it was one of the cooler boards I had seen in recent memory. So you can imagine my surprise when Marc responded that he had also bought a second Croteau single fin, which was apparently even better than the first. When he sent over the photos below I almost fell out of my chair.

Not only are the boards very similar, down to the resin tints and the unusual colors in the logo laminates, but they’re both in absolutely insane condition.

I don’t know if I’m just caught up in the moment but I feel like these are two of the most beautiful 70s single fins I have ever laid my eyes on. I’m just bugging out over all the little details on the boards: the logo placement (specifically, the slight variations on the location of the futuristic “Croteau Equipe” font); the beautiful colors; the similar resin pin lines; everything, really!

I’m also geeking out over the subtle design elements in the tails. You can see the fluted wings on both boards. The blue Croteau single fin has a different tail and sharper wings. I’m not sure how you’d describe the tail on the blue board — a bat tail, maybe? Given Croteau’s penchant for crafting high performance shapes, though, I’d love to understand more about the different designs and how that translated into actual surfing functionality. Sadly, Croteau passed away more than a decade ago.

Thanks again to Marc for sharing the great photos of these insane Mike Croteau surfboards. If you have some of your own, definitely reach out and drop me a line.