The Creation of a Classic: Bill Stewart for Ocean Pacific 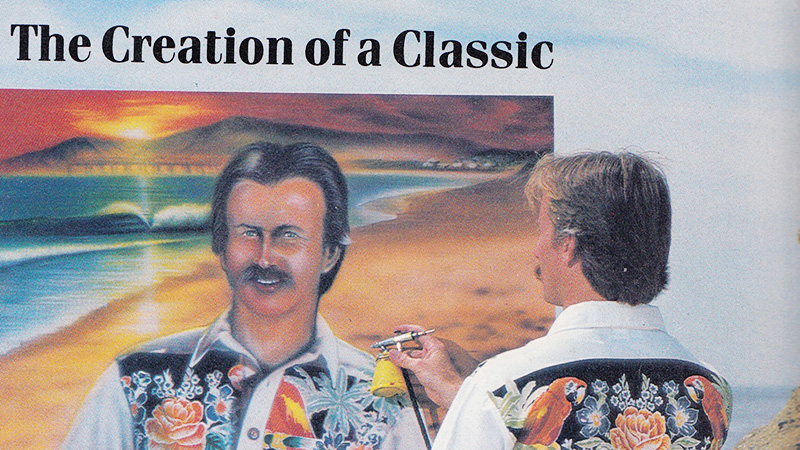 Greetings, Shredderz! Today we have got an 80s Ocean Pacific ad that is a surefire candidate for entry to the self portrait hall of fame.

I just love this ad. It cracks me up, yes, and I also love that it’s a sincere tribute to Bill Stewart. Stewart is the man behind the surfboard label of the same name. He also built a reputation as a talented airbrush artist. Stewart airbrushed a ton of OP surfboards in the 80s, many of which featured detailed closeups of breaking waves.

I am simultaneously impressed and entertained by the fact that Stewart did such a great job airbrushing the exact same shirt he is wearing. It’s a pretty elaborate pattern! He killed it if you ask me. The ad originally appeared in the November 1981 issue of Surfer Magazine (Vol 22, No 11). I don’t know if I’m just feeling overly nostalgic tonight but I do miss the days when the surf industry wasn’t afraid to try some goofy (and ultimately awesome) stuff. I guess the main takeaway from this ad is that nothing is cooler than not caring about how cool you look.

Thanks for reading and we’ll see you in a week with more vintage surf ads, courtesy of Sagas of Shred!