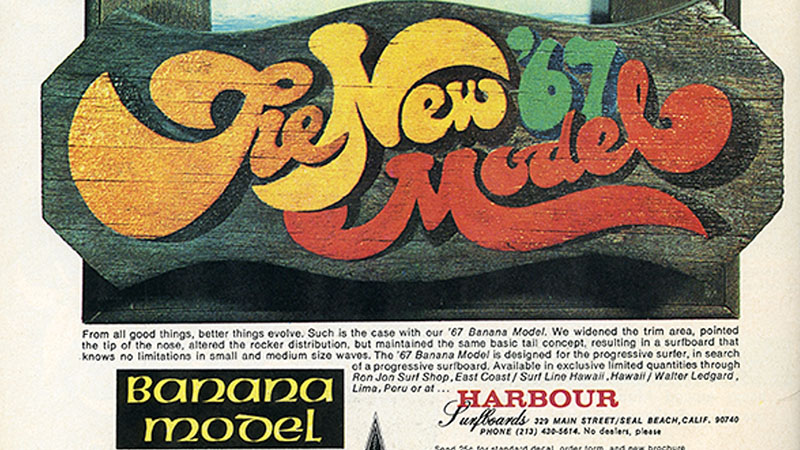 Greetings, Shredderz! As the surf world collectively celebrates the life of Rich Harbour, I thought it was fitting to shed the light on one other chapter of the Harbour Surfboards story: the label’s incredible advertisements. There is an awesome ad archive on the Harbour Surfboards website, and I promise you there’s way more good stuff there than on this humble little blog.

The ad you see below is for the updated version of the Harbour Banana Model released in 1967. The original Banana was released three years earlier, in 1964. For a cool comparison between the 1964 Harbour Banana and the 1967 version, check out this Instagram post from @board4today, which is definitely worth a follow, too.

I just can’t get enough of the Harbour ads. I really dig the one above. Dare I say the early collage style is a bit similar to what made Volcom’s 90s ads so memorable? A lot of 60s surfboard ads are pretty sparing with color and tend towards a minimalistic style, but the Harbour ads are colorful and arresting. The copy and writing on the ads are great, too — check out this early Trestle Special ad, which is a fantastic concept. I’d think that someone with zero interest in surfing whatsoever would appreciate the quality of these ads. There are almost too many to choose from, really — again, the Harbour ad archive is one of the best collections of vintage surf ads anywhere on the internet.