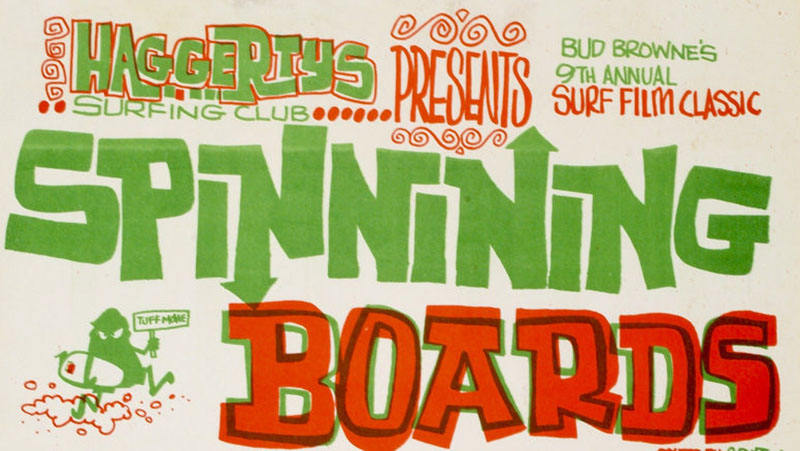 Greetings, Shredderz! Today we’ve got a poster for Bud Browne’s “Spinning Boards” film that was designed by the one and only Rick Griffin.

I recently wrote up Rick Griffin’s equally cool poster for John Severson’s “Pacific Vibrations.” To me, these two posters illustrate Griffin’s range. Griffin might be best known for his psychedelic inspired artwork, but personally I prefer the organized chaos of the “Spinning Boards” poster. There are only two colors and it’s mostly text, but yet the poster is packed with all kinds of details that practically demand a closer look. I love these 60s surf movie posters in general, but this one is a personal favorite.

Bud Browne, who directed “Spinning Boards”, also deserves a shoutout. He is credited with being the first filmmaker to show surf films commercially. One thing you’ll notice about many of these 60s surf movie posters is that the screenings often took place at schools, which I’m guessing were convenient because they had the space and the projection equipment. According to Wikipedia, Browne projected his first movie to an audience at a Junior High School in Santa Monica. The film didn’t have a soundtrack, so Browne apparently narrated the entire thing over the school’s PA system. Browne came to surfing somewhat later in life, simply due to timing and the fact the sport didn’t really exist when he was younger. Browne was in his early 40s in 1953 when his first film was released. Between 1953 and 1964 Browne released a different surf movie ever year (this is alluded to in the text of the poster, when it refers to “Spinning Boards”, released in 1961, as “Bud Browne’s 9th Annual Surf Film Classic.” Sadly, I’m not sure where one can view Browne’s films online, but for more info on Browne and his career, check out the Bud Browne Film Archives website.

The photo of the “Spinning Boards” poster was originally posted on Surf Art. There’s an entire gallery of incredible Rick Griffin designs, which is also worth checking out.