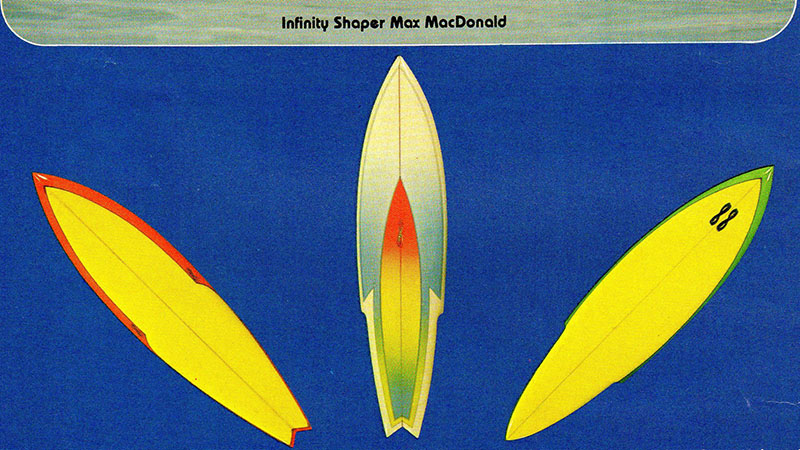 Greetings, Shredderz! One of the things I love best about vintage surf ads is that they often provide some sort of information or context that is otherwise hard to find. I’ve been fascinated with the career of shaper Max McDonald. There isn’t much available about him online, other than the articles I’ve written, and then a post on the old Surfy Surfy blog. McDonald, as it turns out, collaborated with the Campbell Brothers on some very futuristic looking Bonzer designs, including an elevated wing, which McDonald later introduced to Matt Biolos. San Diego shaper Stu Kenson has also riffed on McDonald’s so-called e-wing. You’d think there’d be more info about someone who collaborated with the Campbells, Matt Biolos and Stu Kenson, but alas, it’s pretty slim pickings.

So when I found this Infinity Surfboards ad on Pinterest, I was stoked to see an action shot of McDonald behind the curtain. It’s too bad you can’t see his face, but I was able to find another ad with a better shot. I believe McDonald still shapes and does ding repair in the Santa Barbara area.

Thanks for reading! We’ll be back next Thursday with some more vintage surf ads and hope to see you there.