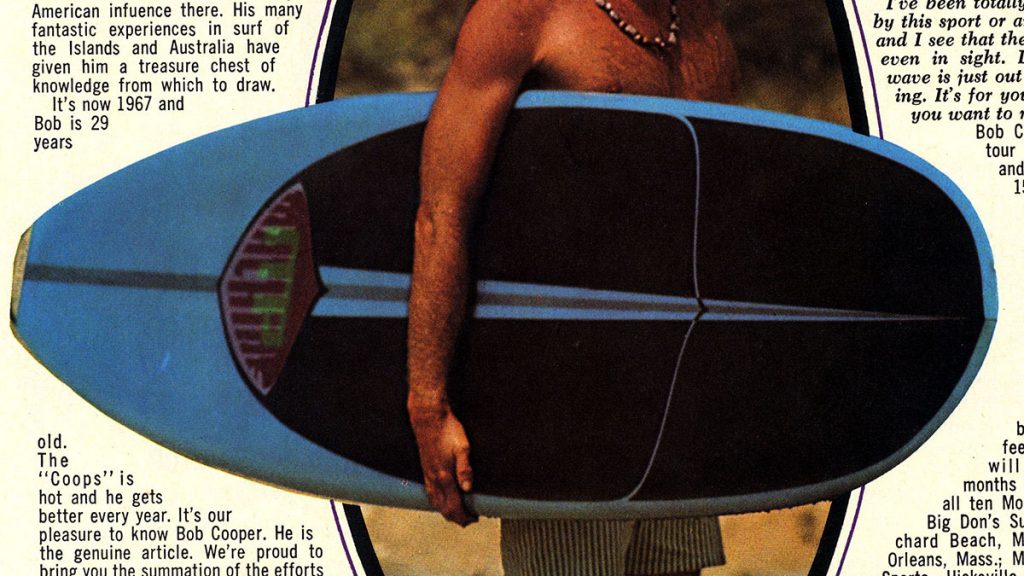 Morey-Pope’s advertisements have made a few appearances on Sagas of Shred. Love them or hate them, Morey-Pope’s marketing was nothing if not original. The Blue Machine ad is pretty buttoned up by Morey-Pope’s standards, but it’s still got some fantastic copy, courtesy of Cooper himself:

A board’s got to turn you on then become part of you, a basic extension of your instincts and the medium of transport from the world of static energies to the endless limits your own body is capable of.

I can make the Machine work perfectly. I do my things on this board designed by me for me. It’s a truth that in honesty has to be passed on. This board works within the framework of these truths. I can’t sell you short cuts to 17 years of experience. If you want to find out what my trip is like you got to use the same medium.

Honestly, I love it. I didn’t expect to get so pumped from reading the fine print on a 60s surf campaign but here we are. It also doesn’t hurt that the Blue Machine is one of the coolest vintage boards ever, featuring some typical Morey-Pope flourish like an off-set fin and a spectacular psychedelic logo. The more I learn about Bob Cooper, the more I suspect that we’re not talking about him as much as we should. The Fans of Bob Cooper Surfboards Facebook group has a modest 600 or so members, but every new post I see in there makes me want to get my hands on one of Cooper’s shapes.

As always, thanks for reading, and Sagas of Shred will be back with another vintage surf ad in a week! Stay tuned.