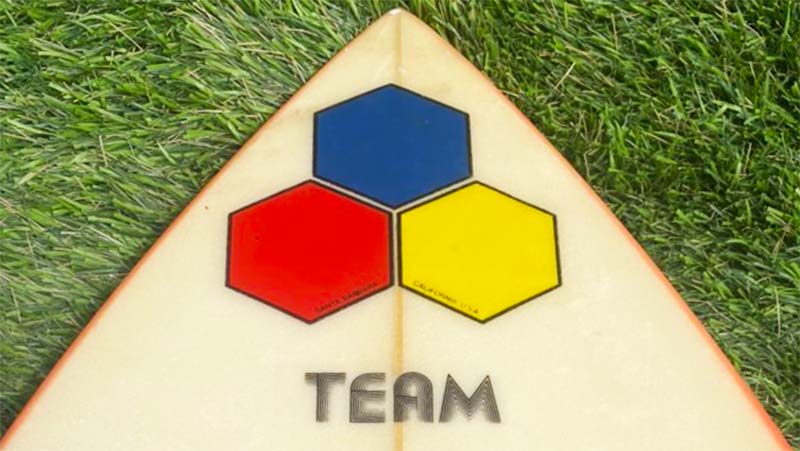 Greetings, Shredderz! Today we’ve got a few unusual Channel Islands Surfboards for your viewing pleasure. Personally, I’d expect to come across more vintage CI boards than actually ends up being the case. It’s surprising given that CI has been one of the world’s largest surfboard manufacturers for years. Here are two unusual Channel Islands boards that were sent in by readers.

I’ve featured many Tri Plane Hull examples on the blog and my Instagram. The TPH comes in a variety of flavors, from twin fins to thrusters to quads. This, however, is the only example of a TPH I’ve seen in an egg outline. In fact, I can’t say if I’ve ever seen any CI eggs. Thanks to @mr_barbershop for sharing the pics of this board. This one looks like it would be a blast to ride. I’d guess it was shaped in the mid-80s.

The second board we have today is a 5’10” twin fin that was hand shaped by Al Merrick himself. Judging by the small “Team” laminates on the board, I have to assume this was shaped for a team rider. Thanks to @peckerfish1979 for sending in the photos you see here.

I love these CI twin fins; like the other board in the post, they seem like they’d be a ton of fun to ride (albeit harder for a surfer of my limited ability.) My guess is this board was shaped in the early 80s.

The board has a clear example of Al’s fish signature (see here for an earlier post explaining Al’s hand signed boards.) Sadly, there’s no name anywhere on the signature. I’ve never seen another CI board with the team laminates on them, but man, that must have felt good to paddle out on one of those things and let people know you were sponsored by one of the greatest surfboard companies of all time.

Finally, it’s interesting to contrast the team twin fin above with an example of a Tri Plane Hull twin fin that I posted about earlier on Instagram: