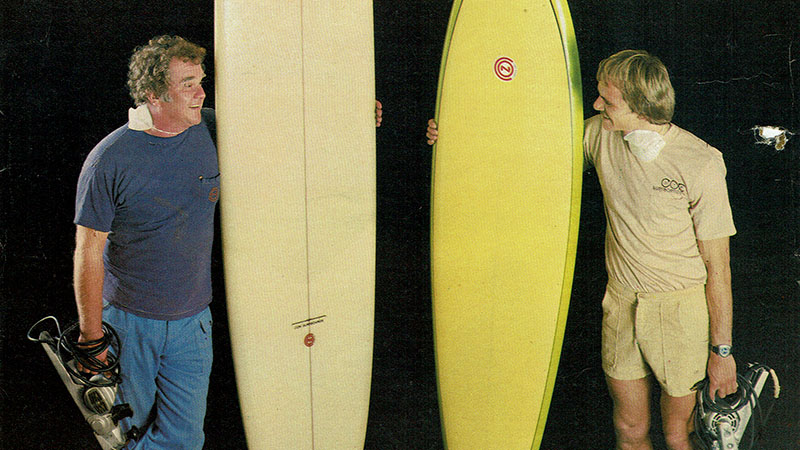 Greetings, Shredderz! As some of you probably know, the Sagas of Shred series features a different vintage surf ad every Thursday. Today we’ve got more of the usual fare, but with some additional history that I’m stoked to share with you all. A little over a year ago I featured what is one of my favorite surf ads of all time: a 70s Con Surfboards spot featuring a young Jay Adams and Tony Alva. A few weeks ago I was pleasantly surprised when someone got in touch and let me know that they had done the graphic design for the aforementioned Con ad.

The graphic designer behind the ad is named Stephanie Akers Cohen. She first met Con Colburn in the mid 70s when she was working at what was then known as a job shop, where she prepared artwork for printing. In 1978 Cohen went to work for Con full time at Control Products, which was Colburn’s company overseeing various products like skateboard accessories. They remained friends until Colburn’s passing in 1991.

Cohen tells me that the Con ad campaigns were something of a collaborative effort. She was kind enough to send over some additional samples of the work she did for Con Surfboards, which you can see featured here.

The ads also help shed some light on Con Surfboards history. Pictured on the left is George Bartell, whose name I had never heard before. Bartell was actually a teacher at the Art Center College of Design in Pasadena while Cohen was a student there. On the right is shaper Mike Olivares. The ad is from 1977. I’ve heard so much about how longboards were deeply uncool during this time, so it’s cool to see that Con, for one, didn’t shy away from this part of its history. Judging from the ad’s copy, Bartell must have been one of the earliest shapers at Con, and was certainly there for many of its prominent models released during the 60s.

Here’s an ad Cohen designed for Control Products, which was Colburn’s skate and surfing accessories company. The illustration in this ad was by the aforementioned George Bartell — you can just make out his signature on the right side of the diagonal line that bisects the ad. The ad is simple but it’s striking, and I think it still holds up today.

Last but not least we have another Control Products ad. (Truth be told I have no idea what a tail skid block is.) You can really get a sense of Cohen’s graphic design style through these three ads. I love the super clean layouts with just the right amount of visual flair. Cohen tells me that many of the ads she designed were black and white, as these were cheaper to produce compared to full color ads. Cohen took a graphic design job at a magazine in 1980, and remained friends with Colburn until his passing. Last but not least, Cohen also designed the logo for Giovanni Cosmetics, which is still used today.

I love old surf ads in general, but it’s even cooler to be able to learn about the people who actually made these wonderful pieces of artwork. Thank you to Stephanie Akers Cohen for sharing all the photos and information contained in this post, and for creating some memorable pieces of surfing history.