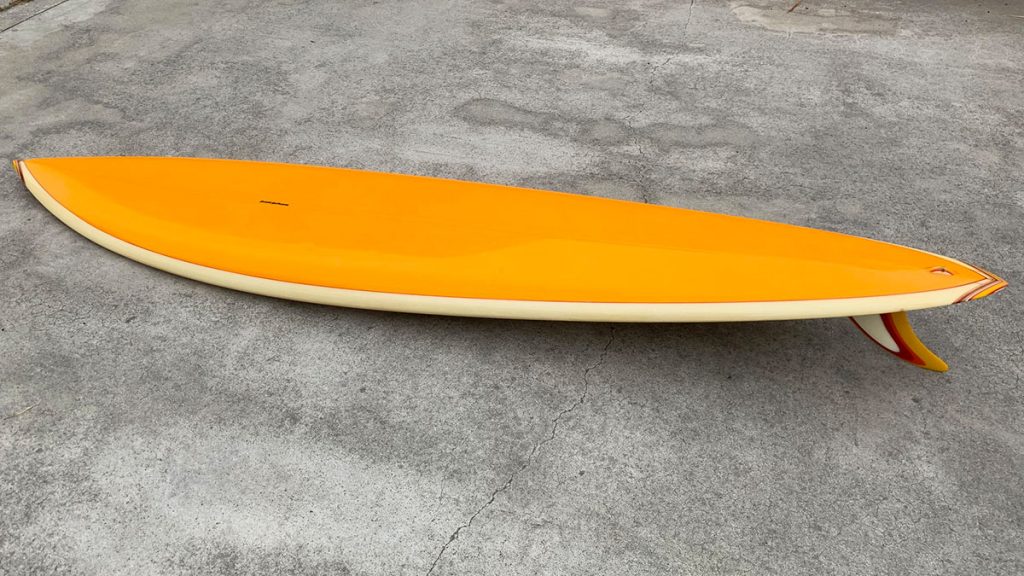 Greetings, Shredderz! Today we’ve got a real treat for you. Pictured here is one of the most beautiful surfboards I own. It’s a 70s Russell Surfboards single fin with a creamsicle color scheme that’s real easy on the eyes. The board is all original and I purchased it from its second owner, who had kept it for years. I love these 70s Russell sticks. Folks like Bird Huffman laud the high quality of these Russell boards — glassed at The Brotherhood — and the label was home to a talented roster of shapers like Mike O’Day, Bruce Jones, Jeff Timpone and Shawn Stussy, among others. The board looks cool, and it has a rad back story, too. Keep reading for a whole bunch of photos and some more info.

The board is 7’6″ and I haven’t gotten around to measuring the rest of it. It was definitely shaped sometime in the 70s, and I’d say towards the middle or latter part of the decade. For a long time I was unsure of who shaped the board. I sent out some questions to people who might know and everything had come back inconclusive. A few months after this blog post went live, I posted a pic of this board on Instagram, and to my surprise, not only did Shawn Stussy shape this board, apparently it’s one he remembers well.

This Russell Surfboards single fin is a stunner, yes, but what really makes it special are the little details that aren’t obvious at first glance. First and foremost are the matching nose block, tail block, fin and leash loop. Oh, and now that you mention it, why yes, there’s also a complementary double resin pin line on the deck, one red and one yellow. The tail and nose blocks are a mixture of fiberglass, resin and wood; the fin and leash loop are just fiberglass and resin. I love how the red, orange and yellow colors are echoed throughout the various aspects of the board. Look, I hate to be this guy, but it’s rare to see this level of detail put into a modern board. This thing is a stunning piece of functional artwork.

I’ve seen a few other examples of 70s Russell Surfboards with matching nose and tail blocks. Ditto for the matching fins and leash loops as well. The Brotherhood factory was known for its exceptional work (in the words of Shawn Stussy, “the Brotherhood was known for not fucking around”), and I have to think that the matching tail blocks, fins etc. was a calling card of sorts. Apparently these boards were referred to as Cadillacs within the Brotherhood — top of the line construction and details throughout.

Likewise, another unique attribute I’ve seen on Russell boards from this era is a stringer setup similar to the one seen here. If you look closely you can see double stringers in a wedge alignment, converging at the nose. There’s also a third mini-stringer (not sure the exact term) in the center of the tail that extends just past the leash loop on the deck. I’ve seen this stringer setup on Russell Surfboards sticks by Bruce Jones and Jeff Timpone as well as Stussy.

The board’s backstory might even be better than its looks. According to the gentleman who sold me the Russell, he picked it up during a trip to Scorpion Bay back in the 70s. The way he tells it, there were a few visiting Americans in attendance, including a talented surfer from Newport Beach. The Newport local was a huge dick who made a point of constantly dropping in on everyone and hogging set waves, eventually earning the nickname “The Newport Snake.” At some point the Newport Snake needed to head back to the mainland, but he was low on cash. He ended up selling the Russell single fin to finance his return trip to Newport. The guy who bought the board was thrilled for two reasons: one, he was getting a sick board; and even better, it was worth the money and then some to send the Snake packing and clear out the lineup. I’ve spoken to a Newport local who has a good idea of who the Snake might be, but that’s all I’ll say.

This Russell single fin is by no means in perfect condition, but I’m into that kind of thing. The fin looks like it has been slightly bent, there are still some pressure dings on the deck, and as you can see on the bottom, it’s discolored in places and there are a few unsightly repairs. Even so I love this board. It still looks phenomenal but it was clearly surfed and enjoyed. I like knowing that this Russell Surfboards single fin wasn’t just hidden away and that it actually got ridden in some real conditions.

Last but not least, a big shoutout to Ryan and KC for helping me grab, stash and transport this gem until I was able to get my grubby paws on it. At first I bought the board thinking it was going to be a wall hanger, but the more I look at it, I figure I have to surf it sometime. We’ll see when, and I’m worried that I won’t be able to do this thing justice, but hey, if it’s good enough for the Newport Snake I figure it’s good enough for me!