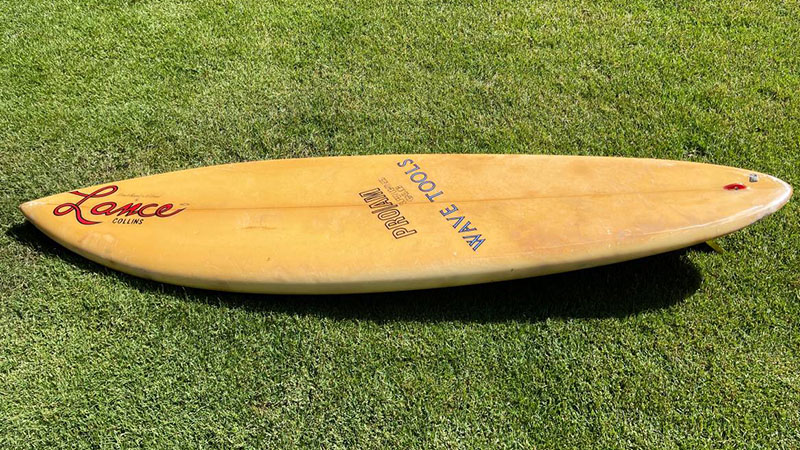 Greetings, Shredderz! Today we’ve got a few single fins that recently caught my eye. Keep scrolling for some more pics and some brief commentary.

This 1981 Lance Collins-shaped Wave Tools single fin was recently listed on Craigslist for a mere $250. While this board isn’t as in your face as Collins’ boards from later on in the 80s, it wouldn’t quite be a Wave Tools without some color, and I love the airbrush along the channels. More than anything else, the board looks like it would be a blast to ride.

First, a confession: I have no idea what to call this thing (or boards like it.) A mini longboard? An egg? A…shudder…mid-length? Also, I’d like to go on the record as saying that I want no part of any heated debate over surfboard nomenclature. Surfing and writing about surfboards is the one hobby I have and the last thing I need is to ruin it by getting dragged into an unwinnable argument on the internet. Anyway, I’ve been really getting into these mini longboards. This South Shore Surfboards measures in at a tidy 8’5″ and it looks like it would be a blast to ride. It was shaped by Jim Fuller, the longtime head shaper at South Shore. I’m just so intrigued by the outline, with the severe squash tail, and then what look to be some down rails by the nose. The fin box was replaced at some point. This board just looks so fun. For some similar sticks, check out this killer 8’5″ Hansen diamond tail, and then an 8’6″ Bill Shrosbree-shaped Model T for Sunset Surfboards.

Here’s a very cool Wilderness edge board that’s currently for sale on Craigslist in Hawaii. According to the seller, the board was shaped by Randy Rarick, which I was surprised to read. As far as I can recall, I’ve never seen a Wilderness shaped by Rarick, but I am far from an expert on this topic, so I’m certainly not ruling anything out. That’s part of the fun of writing about surfing — I’m always learning new things. For another rad edge board, check out this Bob Duncan shape I wrote up a while back.