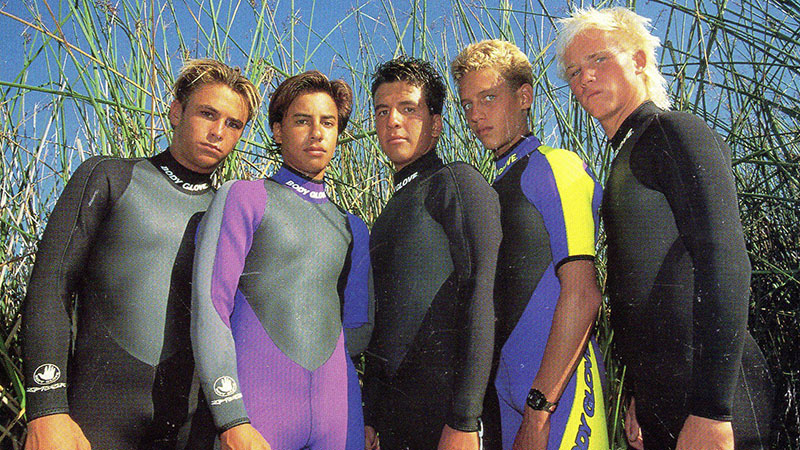 Greetings, Shredderz! Per the usual Sagas of Shred rules, we’ve got another vintage surf ad for all of you. This one is a stunner of a Body Glove ad from the glory days of 1991. I originally found it on Pinterest here.

From left to right: Shane Dorian, Matty Liu, Vinnie De La Pena, Rob Machado and Pat O’Connell. I can’t believe how young they all look! Machado looks like he doesn’t have a driver’s license yet. Dorian and Liu, of course, went on to star in “In God’s Hands”, which is still one of the worst movies I’ve ever seen. I’m sorry, I really try not to be snarky here, and I do have a genuine and unironic love for these ads, but even I can’t defend that film. The Momentum Generation really ended up having some great careers. Dorian and Machado are still relevant today, and earlier this year O’Connell was brought on as President at John John’s new clothing label, Florence Marine X. I had actually never heard of Pena before, but he co-founded the 90s / 2000s brand Ezekiel, and he’s now an executive at Vissla. Matty Liu, from what I understand, is a successful realtor in Hawaii. It’s not easy to make a career in surfing, much less a long one, and it’s rad to see that all five of these guys are apparently still going strong.

Thanks for reading and we hope to see you next week for more Sagas of Shred!