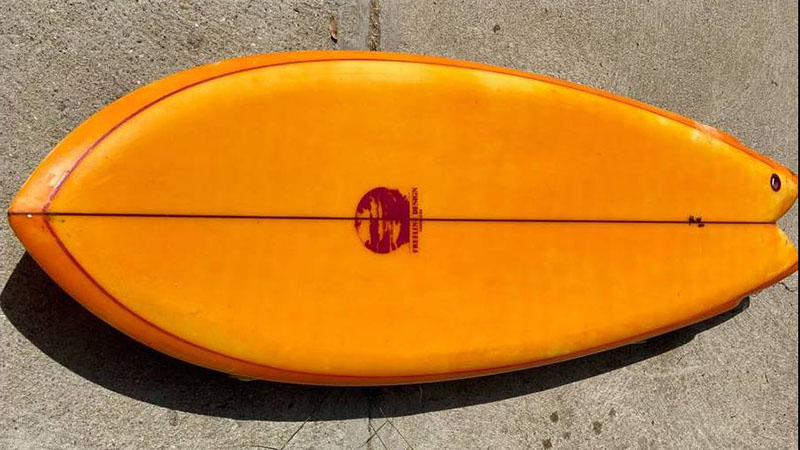 Greetings, Shredderz! Every once in a while a cool board pops up on Craigslist that’s worth a closer look. I’ve been intrigued by John Mel’s boards, shaped under the Freeline Design label, ever since a ding repair guy swore by his. Freeline Surf Shop, also owned by the Mel family, is a longtime Santa Cruz staple.

Pictured above is a 5’6″ Freeline Design winged twin fin shaped and signed by John Mel. I think the board was probably shaped in the 70s. I also suspect it was originally intended as a kneeboard. I’ve seen a few early Freeline ads that specifically mention how Mel shaped surfboards and kneeboards. For me, at least, the line between a vintage fish and a kneeboard is a blurry one, so take my terminology with a grain of salt.

This is just a lovely little stick. It’s not in the best condition but I love seeing these older fish. I’d be curious to hear the story of how the fish, which was created in San Diego, made its way up the California coast. From what I can tell, there were only a handful of non-San Diego shapers experimenting with fish designs during the 70s (assuming this board was shaped then, anyway.) Off the top of my head, I’ve seen some vintage Steve Brom fishes, and I’m sure there are many more names I’m missing, but it’s an area I’d love to research some more.

I also love the older Freeline Design logo, as seen above. I think it’s got a nice little abstract thing going on, especially given the colors. It’s purely aesthetic, but this Freeline Design twin fin is a great illustration of what I like about older boards that have going through the aging process. If I could wave a magic wand and fix all the dings in the bottom I totally would, but there’s something very cool about how the colors have faded over time.

Last but not least the board is being offered at a mere $120. Here’s the Craigslist post. It’s located in Ventura, California. The board definitely needs some work just to get water tight, and this might be a project best suited for someone who either can do the repairs themselves, or doesn’t mind throwing a ton of cash at fixing it up, assuming you even have access to an unusually open minded ding repair guy. Anyway, this Freeline Design John Mel twin fin is a rad board, and I hope you dig these little relics from California surf history as much as I do.