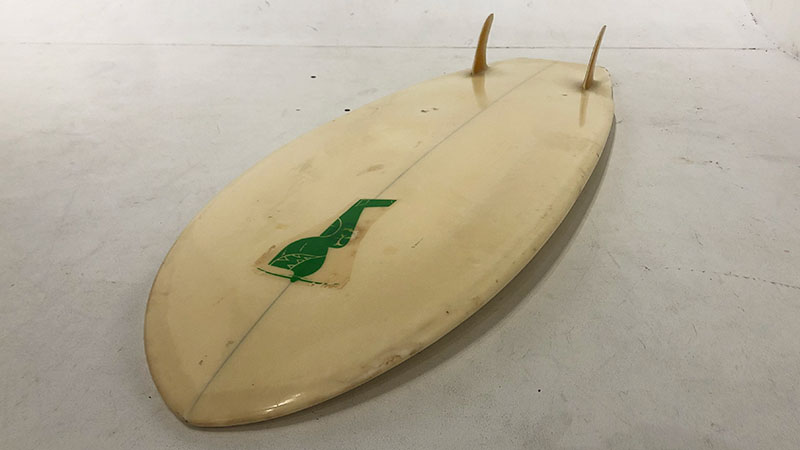 Greetings, Shredderz! If you’ve been reading the blog or following along on Instagram for a while, you probably know that George Greenough is a frequent subject. Greenough’s contributions to surfboard design and performance are too numerous to cover in this post. The other thing that makes Greenough such an interesting dude is his status as one of the most elusive characters in the sport. Therefore anyone without access to Greenough — like yours truly — is left to connect the dots through secondary sources and some half-assed internet research. (For a rare bit of first hand info on Greenough, check out this transcription of John Grissim’s profile titled “Surfing’s Mad Scientist”, which was published in his 1983 book “Pure Stoke.)

A week ago, a reader who goes by Lachie sent me two incredible Sky Surfboards twin fin kneeboards. I featured these boards in an earlier post, which you can read here. The kneeboards are both shaped by Chris Brock, and they incorporate the Tri Plane Hull that Brock developed alongside Greenough and Cundith. Lachie recently sent over a whole new set of pics, and I couldn’t resist featuring the boards once more, as they are rare examples of earlier interpretations of Greenough designs.

Both of these kneeboards are roughly 5’3″ x 22/23″. There are prominent Sky Surfboards logos on both boards. Sky Surfboards is based out of Byron Bay and it is still operating today. Check out the Sky Facebook page for tons of more information about the brand. The white board bears Chris Brock’s name on the logo and has Greenough’s famous Curtiss P-40 Warhawk logo in green on the bottom. There’s also a cool yellow “George Greenough” laminate on the tail of the white board, which I had never seen before.

If I had to guess, these boards were likely shaped sometime in the late 70s or early 80s. The inimitable surfresearch.com.au — an internet treasure if there ever was one — features two different Sky kneeboards shaped by Chris Brock. The first surfresearch.com.au board is dated to 1980 and it measures 5’8.5″ (it’s also described as 1978 elsewhere on the site). The second is listed as having been shaped in 1979, and the dimensions are given as 5’6.5″. The second surfresearch.com.au board has the same George Greenough laminate that is seen on the white board here in this post.

I figure that these two Chris Brock Tri Plane Hull kneeboards had to have been influenced by Greenough’s famous Spoon. That said, I have a hard time connecting the dots. Any examples of Greenough spoons I have seen are single fins, for starters. Neither of these Chris Brock TPH kneeboards have scooped out decks and they are made from the traditional foam and fiberglass construction. In addition, two Sky Chris Brock kneeboards that I found on surfresearch.com.au seem to have far more in common with the classic Greenough spoon than either of the ones seen here.

Check out the subtle wings that appear towards the tail. As far as I can tell, this is another design element that is nowhere to be found on any of Greenough’s spoons.

I also don’t want to delve too deep into studying the Greenough tea leaves when the boards were in fact shaped by Chris Brock, an accomplished shaper in his own right. Brock and Greenough are close friends, and Brock appears in Alby Falzon’s 1972 film “Morning of the Earth.” There’s a great interview with Brock in The Surfer’s Journal, which you can find here. In the Journal piece Brock is on record saying that he wishes Greenough hadn’t ridden a spoon in “The Fantastic Plastic Machine”, as Brock thinks it was the wrong board for the conditions, and a surf mat would have been even faster. According to the article, Brock still lives near Byron Bay, not too far from Greenough, and he occasionally shapes boards for friends and family.

I found the photo above of Chris Brock the website of a gentleman named Lloyd Godman. The photo was taken in either 1973 or 1974. Apparently Brock lived with Godman and others on Kauai and the site has a ton of photos of beautiful, unspoiled Kauai in the 70s. There are some more action shots of Brock surfing, and he rips! In the photo above Brock is posing alongside a red spoon and then a surf mat on top of it.

But wait, we’re still not done! Lachie actually has a third Chris Brock-shaped Sky twin fin kneeboard with a tri plane hull bottom, which you can see above. Rumor has it that at some point Sky Surfboards tried to make some stand up versions of its kneeboards, and the yellow board was part of that experiment. I can’t confirm that story one way or another.

Last but certainly not least, Lachie not only owns these two Chris Brock kneeboards, but he rides them, too. Here’s Lachie in the pit at Noosa on the blue Sky Chris Brock twin fin featured earlier in the post. The photo is by @nashysphotos on Instagram.