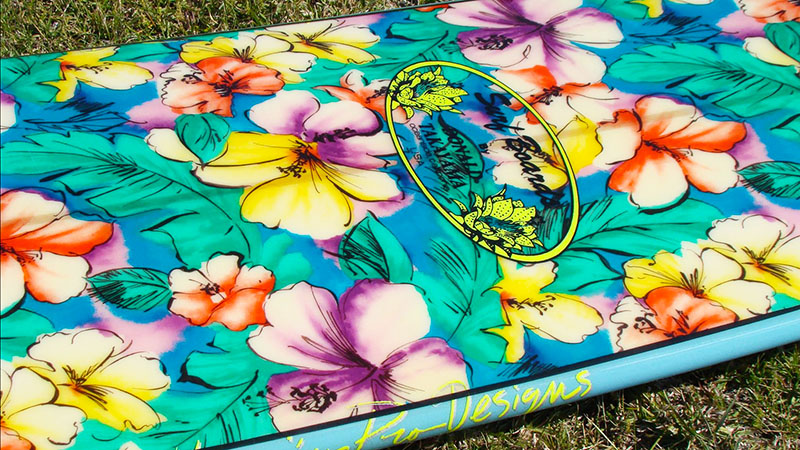 Greetings, Shredderz! If you didn’t already know, consider this official notice: there are few things I love more than a beautiful surfboard with a great story behind it. Here is a 9’6″ x 22 1/2″ Hawaiian Pro Designs Donald Takayama with a gorgeous fabric inlay. The pics you see here were originally uploaded to a Facebook post from five years ago. I figured the board was too good to leave buried in the archives of an extremely active Facebook group (which is worth joining if you haven’t already.)

According to the original post, the board pictured above was custom ordered from Takayama in 1993. I’m not sure when Donald employed ghost shapers to help produce his boards, which makes it difficult for me to definitively say whether or not a board was “hand shaped” by Donald, but personally I’m drawn to any of the boards produced before Donald’s passing. I’m always on the lookout for Takayamas that were signed in pencil, but the stunning fabric inlay here makes it impossible to see.

Not that I’m complaining, of course: the fabric inlay is incredible. According to the seller, it’s from Hoffman California Fabrics. Hoffman Fabrics was founded in 1924 by the father of Walter and Flippy Hoffman. Walter’s step-daughter Dibi Hoffman went on to marry Herbie Fletcher (his other step-daughter was Joyce Hoffman, one of the earliest female pro surfers.) The fact it’s from Hoffman California Fabrics adds another layer of cool to this already stunning board.

Generally speaking, I believe surfboards were meant to be surfed. (This belief has not stopped me from buying boards and stashing them away.) That said I couldn’t blame anyone for keeping this thing on ice and having it as a wallhanger in their home. For all my love of boards I stop short of thinking they’d make great decorations, but this one is an exception.

And what can I say, I’ve got a weakness for glass on side bites with matching fabric inlay, too. I mean, what a killer touch. The seller pointed out that there’s still tape on the side bites, so this thing hasn’t even touched the water. There are a few dings, which the seller pointed out on the original post, but it’s definitely one of the cleaner ~30 year old boards I’ve laid eyes on. I’m not sure who owns it now, as it was listed five years back, but hopefully it pops up again.