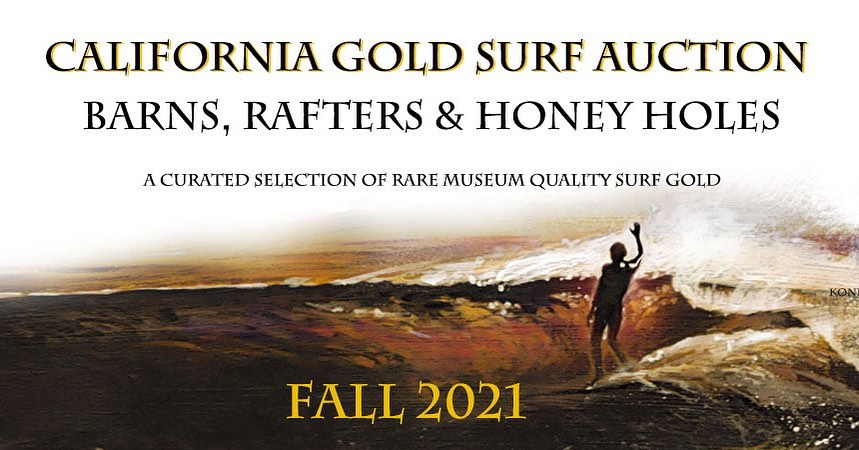 Greetings, Shredderz! Earlier this week the latest installment of the long-running California Gold Surf Auction wrapped up. Here is some quick analysis of the results from the “Barns, Rafters & Honey Holes” auction. As a reminder, here’s a list of all the lots, along with the final prices.

First and foremost…who the hell paid $32,000 for a complete run of The Surfer’s Journal?! This was the single highest priced item out of the entire auction. I’m not joking, I had a ton of extra back issues lying around and I literally had to pay $30 to get them out of the house. Does the buyer realize that you can also access all of the articles online? I love the Journal, and they set the bar when it comes to surf journalism, but outside of money laundering, I have no idea how to explain this transaction. You could’ve bought the two Greg Noll Miki Dora “Da Cat” models in the auction, and the Gerry Lopez Lightning Bolt Pipeliner for the same amount of cash.

Next up, in the non-magazine back issues category, an 11′ Pat Curren balsa elephant gun went for a tidy $26,000. I’m a bit surprised given the board was made in 1996 (albeit modeled after a 1959 shape). Personally speaking, I’m just not that into these older elephant guns. Clearly I’m in the minority, and even if it’s not my personal cup of tea, the folks behind California Gold do a great job procuring these boards.

Miki Dora is still one of surfing’s most famous antiheroes. Again, I’m not a big Dora guy myself, but I’ve been outvoted and it’s not even close. This 1985 Natural Progression Miki Dora Super Tanker was one of the stranger and more interesting pieces in the entire auction. The range was a whopping $35K – $50K, and the board failed to meet the reserve. I’ve written a fair amount about Natural Progression over the years, and I had no idea that they were associated with Dora. (Someone also recently posted some footage on Instagram riding a Super Tanker — guessing it was a different board — in France, but I can’t find it.) And on the Dora front, I’m again a little taken aback that the “Da Cat” modern reproduction went for $11K, versus $10K for an original board (which had been fully restored).

A personal Kelly Slater board shaped by Al Merrick and ridden at Bells Beach in 2010 went for $12,000, double the high end of the $4K – $6K estimated range. I wonder when we’re going to start seeing more Momentum-era boards enter the auction conversations. An Andy Irons personal rider was sold at auction a little over 4 years ago; sadly, I don’t know what the price ended up being. As I said in my earlier auction writeup, I’m surprised that this edition didn’t have too much in the way of 70s and 80s stuff.

In writing this post I just realized that the historical results for a bunch of older auctions are also available at this link. I always dig seeing the boards that get selected for these auctions, and I have to admit, I’m also very curious to learn what people end up paying for them. Congrats to Scott Bass and co for putting together another cool selection of boards, and to all the buyer who walked away with a dream purchase.