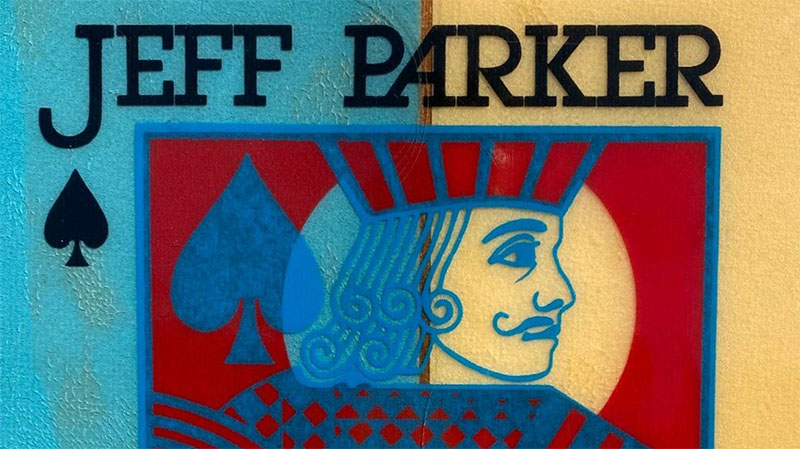 Greetings, Shredderz! It’s another day and we’ve got another rad 80s surfboard for your perusing pleasure. Pictured below is a killer 1981 Wave Tools Jeff Parker Model twin fin that was sold on eBay just a few days ago.

According to the original eBay listing, the board measures 6’0″ x 21 1/4″. Parker was an early Wave Tools team rider during the label’s 80s peak. I haven’t seen a ton of Jeff Parker Models, but the board you see here looks very different than the only other Wave Tools Jeff Parker Model I featured, which has a thruster setup, some wings and a squash tail. I also wrote up a 1980 Wave Tools ad where you can see a picture of Jeff Parker along with the rest of the team.

The Jeff Parker laminate, as you can see, is just dope as hell. I love how the red and blue colors are echoed throughout the rest of the board. For a while now I’ve been coming with some extremely niche takes about how I love seeing the predecessors to the neon Echo Beach boards we all know and love. I’ve written up a few cool 70s Wave Tools boards, including this beautiful sting I recently featured, for example. This Wave Tools twin fin has some bold colors and multiple oversized laminates, but you can also see the older font. The board is just slightly more subdued than, say, the really crazy checkerboard and fluoro stuff that became the label’s calling card.

I can’t argue with the practical benefits of fin boxes, but I’ll always have a soft spot for glass on fins, and especially ones with laminates on them. It’s such a cool touch.