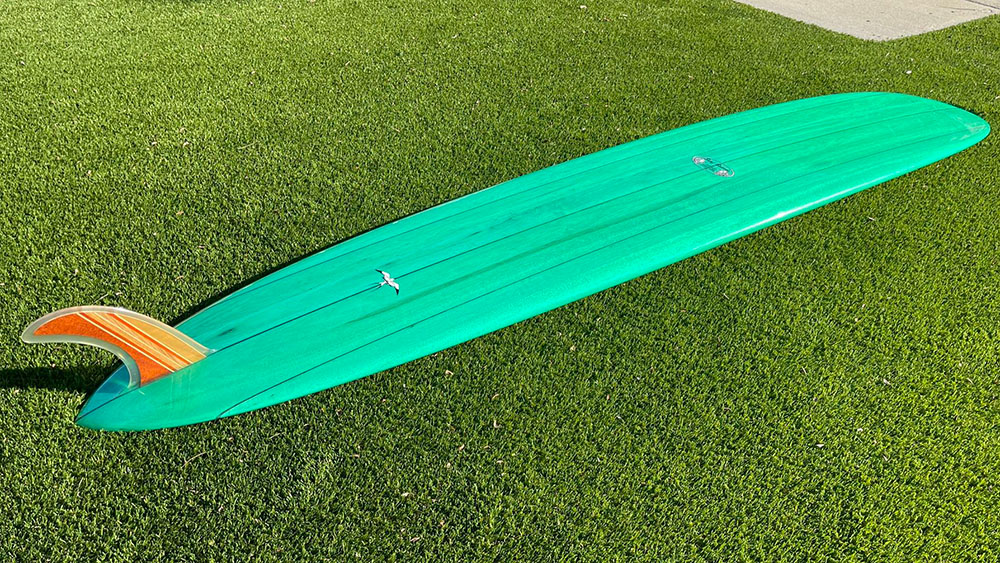 Greetings, Shredderz! Today we’ve got a truly incredible board for you: a 10’0″ balsa Donald Takayama longboard with a beautiful teal resin tint. Shout out to KC for sending this one my way. The board was recently put up for sale online. If you look around you can find the listing (it’s not on Craigslist); just be forewarned that the seller is asking a cool $20K.

I posted the board on Instagram, and luckily some knowledgeable folks chimed in. Michael Takayama, who is Donald’s nephew and a standout shaper in his own right, says the board was shaped in 1998. Michael Takayama claims Donald shaped five triple stringer balsa boards with resin tints. Two were purchased by Michael’s sisters, and this is the third, meaning that there are two more resin tint triple stringer balsa Takayamas that are unaccounted for. As always, if you own one of ’em, definitely let me know!

According to Joel Tudor, the board was also part of a giant batch of about 40 balsa boards that were all glued up at one time. Tudor referred to this as “the last great purchase of balsa for [surfboard] building” and as little as I know about balsa wood, purchasing enough for 40 boards at once sounds insane.

The glass on fin is straight up ridiculous. If, like me, you need to take a few minutes to drink it in, by all means take your time.

Last but not least you can see one of Donald’s classic signatures, formatted just like the rest of his boards from this era, on the stringer. I can’t believe how rad this board is. It’s a perfectly preserved piece of history from an all time shaping great. While I believe surfboards were made to be surfed (note: I do not follow my own advice, and there are far too many boards I own that are collecting dust), I’m actually pumped that this balsa Donald Takayama surfboard has been so carefully stored and handled over the years.