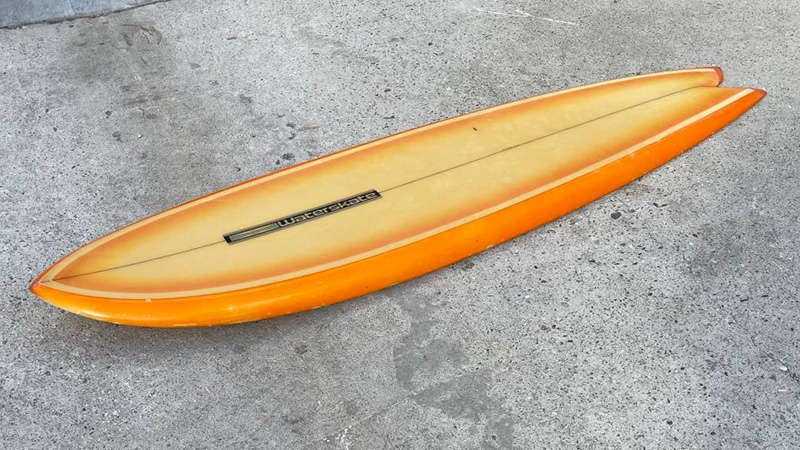 Greetings, Shredderz! Today we’ve got a sweet sled that helped me solve a surfboard puzzle that had been bothering me for some time. The 6’8″ Gordon & Smith Waterskate model you see below was recently posted on Craigslist, and seeing this board helped me piece together some of the history behind the Waterskate. Keep reading for the full rundown.

First, some basic housekeeping items: the Waterskate’s dimensions are 6’8″ x 21″ x 3″. A lot of craftsmanship went into the board, as evidenced by the resin tint cut lap, the resin pin line on the deck, and the orange airbrush spray. It’s a stunner, no matter which way you slice it.

I would describe this Waterskate as a pretty straightforward 70s single fin (though I suppose swallow tails weren’t super popular then; more on that later). You can clearly see the Waterskate laminate on the deck. However, I had always heard about the Waterskate as a Tom Morey invention with a concave deck and other radical design elements, which doesn’t match up to what you see from the orange Waterskate pictured here.

Well, it turns out there are actually two different versions of the Gordon & Smith Waterskate, and they look very different from one another. The original Waterskate was invented by Tom Morey, and it has a very distinctive look. The second version of the Waterskate I’ve seen referred to as the Fish Waterskate. The orange board is an example of the second version.

You can clearly see the differences between the original Waterskate and the Fish Waterskate. The original Waterskate was designed to keep the volume all the way out to the rails. Hence the aforementioned concave deck, which, confusingly enough, is also a bit of an S deck design given the slope in the tail. The tail is unusually wide, too.

The Fish Waterskate doesn’t seem to have much in common with the original model designed by Tom Morey. I found a Facebook post from the official Gordon & Smith page that details the official launch of the G&S fish model in 1973, which then became five different models, referred to as the “Fish Family”: the Swallowtail, the Summer Fish, the Winter Swallow, the G&S Fish, and the Fish Waterskate. Why they called it a Fish Waterskate is a bit of a mystery to me.

And if we want to get even further down the rabbit hole, I think G&S’ naming conventions for their so-called “Fish Family” are a bit imprecise. For example, see this G&S ad from 1973 that was posted on their Facebook page. If you carefully read the descriptions, you’ll note that only the G&S Fish Model is described as a twin fin; whereas the Summer Fish and the Swallowtail are both single fins. Therefore it seems like the “Fish Family” refers more to the swallowtail that G&S placed on a variety of different outlines, whereas the fish was a twin fin.

Last but not least, if you want to be even more confused, here’s a Waterskate that is neither the Tom Morey design nor the swallowtail Fish Waterskate. Your guess is as good as mine!

Otherwise I hope you enjoyed this examination of Gordon & Smith’s Waterskate model. As always, if you have more info or pics, drop me a line.