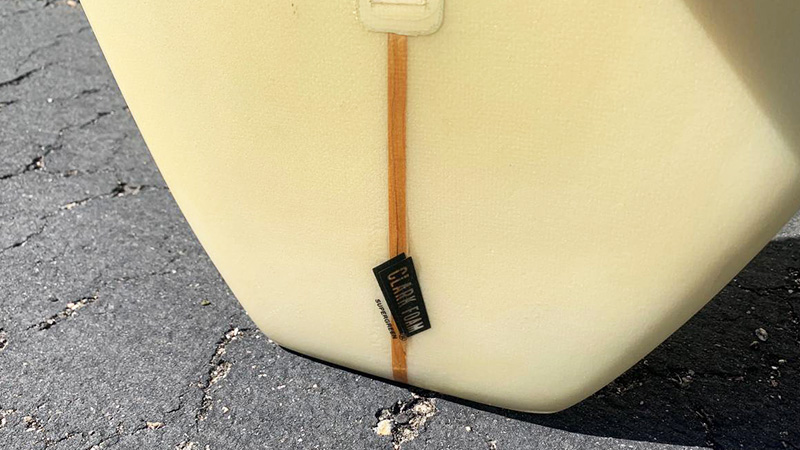 Greetings, Shredderz! Today we’ve got a killer Liddle Surfboards L-Spoon model. As the name suggests, the L-Spoon was heavily influenced by the Yater Spoon. This bad boy was posted on Craigslist a few weeks back, which is where I got the pics.

The Liddle Surfboards site — which is truly an internet classic, I hope it never changes — has a couple of interesting tidbits about the L-Spoon. First, it looks like Liddle rarely shaped boards in this size range. Kirk Putnam is quoted on that page saying that Liddle doesn’t shape boards over 8′, but almost immediately afterwards Putnam mentions how he used a 9’2″ L-Spoon model as a template for subsequent Greg Liddle Designs boards, which were mostly shaped by Brian Hilbers, and later Scott Anderson. So rather than take this quote literally I’ll interpret it to mean that Greg Liddle didn’t shape very many boards in the 9′ range.

According to the seller, the fin is an original Liddle 10″ flex fin. Liddle famously invested a lot of time and energy dialing in the subtleties of flex fins to bring out the best in his displacement hulls.

Personally, my appreciation of Greg’s boards has much more to do with the history and the vibrant scene around them, as opposed to being a full blown member of the displacement hull cult. And in that regard I really dig the rare “Crash Test Dummies” laminate on this board, along with the dual Clark Foam logos, both of which are set at a rakish angle.

Last but not least, you can clearly see Greg’s signature and incredibly detailed dimensions on the board. #3752 is the board’s serial number; I’m hazarding a guess that it was shaped in the early 90s.

Hope you enjoyed this look at an unusual board from one of California’s most interesting and mysterious shapers!