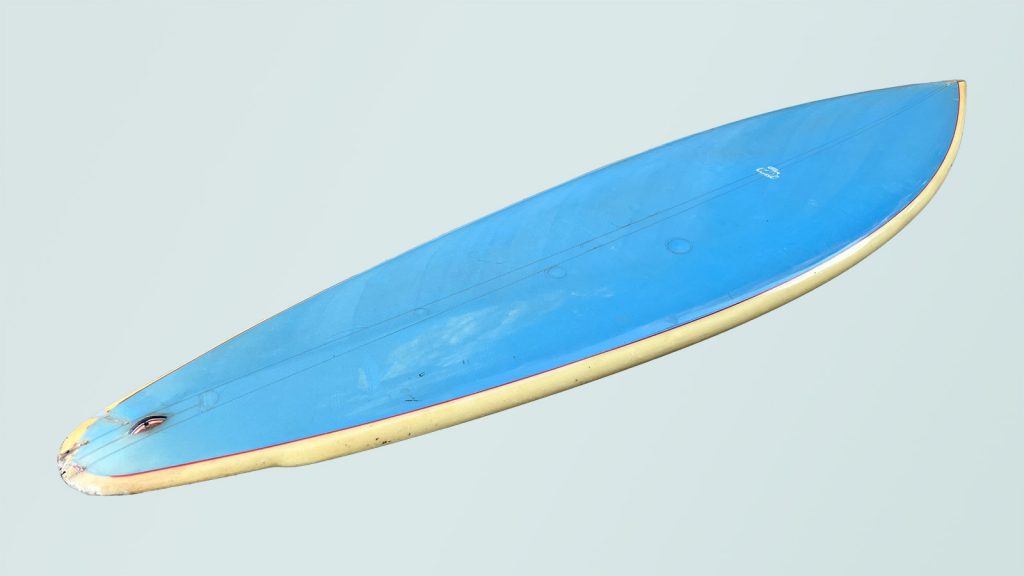 Greetings, Shredderz! I find surf history endlessly fascinating, and oftentimes, the more obscure it is, the better. But even though I try to stay open minded and learn new things, there are a few classics to which I repeatedly return. Ever since I first discovered that Shawn Stussy began his shaping career at Russell Surfboards, and saw a glimpse of one of his twin fins on Board Collector, I’ve been hellbent on finding as many Stussy-shaped Russells as possible. Not too long ago I scored a Russell single fin shaped by Stussy, which I wrote up here; and I’ve been on the hunt for more ever since.

First things first: I believe the board you see featured here is a Russell single fin shaped by Shawn Stussy. I can’t definitively say that’s the case, as I haven’t gotten confirmation from the man himself. I did, however, show pics of the board to a mutual contact. Stussy confirmed that he did the artwork on the board, and mentioned that the shaped looked familiar, too. (This seemingly indicates that Stussy drew artwork on Russells that were shaped by other people, but that’s all I’ve pieced together.)

Thanks to Jesse McNamara for picking up the board and holding onto it for a bit (and for some emergency ding repair, too!) All the photos in the post were taken by me and I also did the photo editing.

I’m a bit embarrassed to admit I’ve never bothered to take measurements of the board. Maybe it’s in the 6’4″ range, possibly longer? I’ll get some updated dims at some point. But as you can see, it’s easy to get distracted by the looks on this sled. It’s got a classic 70s single fin outline, with wings ending in a round tail, a beautiful blue resin tint on the deck complemented by a red pinline, and a resin leash loop, plus a wedge stringer setup.

The board is in solid condition considering its age. It could still use a little work: you can see some of the old repairs in the tail, and sadly some of that original resin pinline on the deck has been removed as a result from some of the fixes. That said, the deck is still in surprisingly great shape. There are hardly any pressure dings.

I’ve been on record before saying that I prefer boards in original condition. Full glass off restorations certainly have their time and place, but I don’t mind a board with some imperfections. Still, at some point I’d like to get this thing patched up a bit, but I’m pretty happy with it as is.

Last but not least, how rad is that original Stussy artwork on the deck? It’s pretty small and subtle — can’t be more than just a few inches on each side — and if you didn’t know what it was, it’d be pretty easy to overlook. I love seeing how this early example of Stussy’s artwork already displays the details that would make him world famous in a few short years. You can see the distinctive handwriting; the sense of humor and unique pacing in the word choice, which would later become a staple of Stussy ads; and and the stylized cartoon figure. Obviously I’m biased, but as far as I’m concerned, this surfboard is a piece of modern art, with a hand drawn piece (to say nothing of the board itself!) from one of the handful of people who helped lay the foundations for modern street culture. So even if you don’t give a single shit about surfing, I think this board is an exceptional piece when you think about the impact Stussy has had on art, fashion and culture.