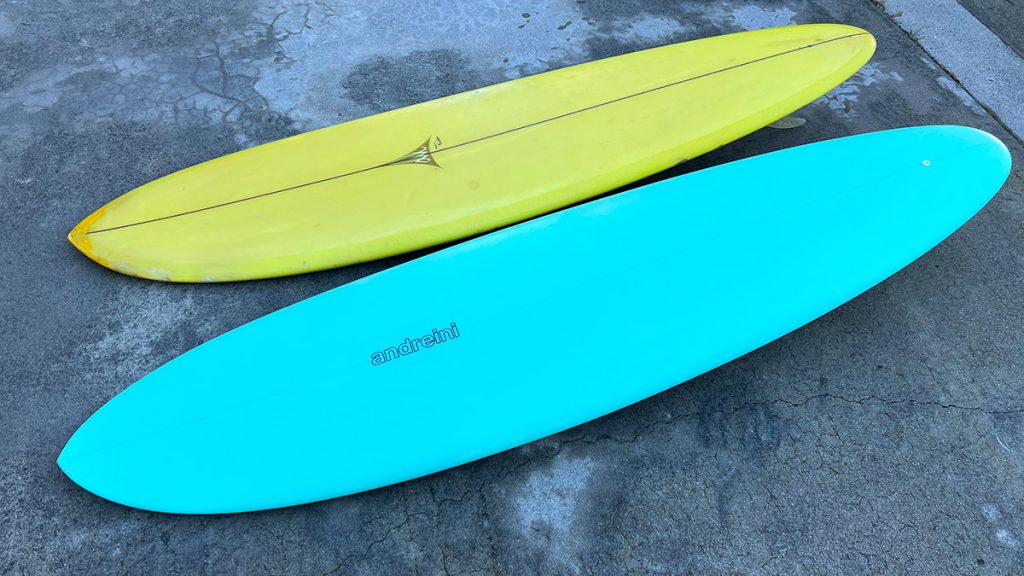 Greetings, Shredderz! For those of you who might have missed it, earlier this year we premiered the first ever original Shred Sledz film, “Here Now: Past & Present.” Filmed and edited by Kyle Buthman and starring Darshan Gooch, “Here Now” featured two boards shaped by Marc Andreini: a vintage “365” model, which is the precursor to Marc’s famous Vaquero model; and a modern Vaquero that Marc was kind enough to shape for the film. If you haven’t yet checked out the movie, you can find it here. For those of you interested in a closer look at the two boards, see below for more pics and detail.

On the left is a yellow 365 Model, which was shaped sometime in the 1970s. It still has what I believe is the original fin. Thanks to Jesse for lending us the vintage Andreini 365.

Both boards are 7’1″. The vintage 365 Model has a White Owl Surfboards laminate on the deck, and you can barely make out a faded Surf-n-Wear Beach House logo on the bottom. As a kid Andreini was a member of the White Owl Surfboards team, and his affinity for the label carries on today. Even though White Owl is no longer a surfboard company per se, Marc still shapes boards with White Owl laminates as a nod to the label’s influence on his surfing career. Meanwhile, the Beach House continues to sell Marc’s boards decades later, which I find incredibly cool.

The blue board is a stock 7’1″ Vaquero that Marc shaped immediately after we showed him the vintage 365. One goal we had in mind for the video was to compare and contrast the two boards, as seen through the lens of Darshan’s surfing. Here are some still photos of the Andreini surfboards to complement the footage in “Here Now.” Hope you enjoy a closer look at these killer sleds!