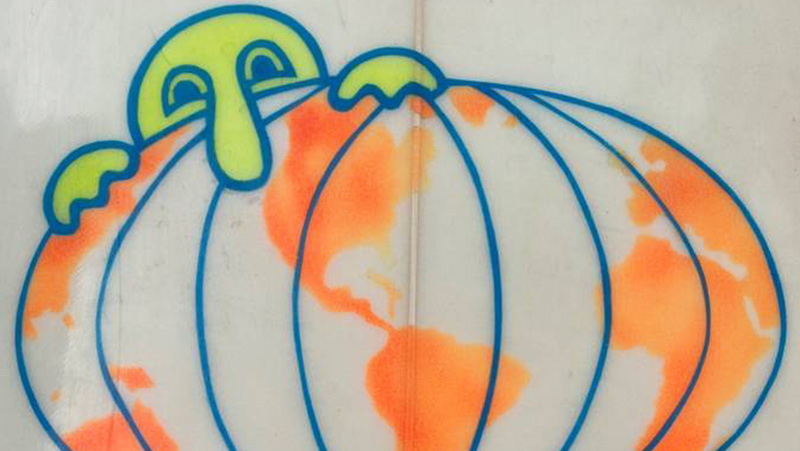 Greetings, Shredderz! There’s still not quite an hour left in Takayama Tuesday, so I’m gonna make this quick. Featured here is a very cool 8’4″ Donald Takayama Dale Dobson longboard that was recently sold on Craigslist. Pics are all via the original listing.

This board is a trip, and as far as I can tell, it’s pretty rare, too. I’ve only seen a handful of Dale Dobson Takayama boards, which I’ll include further down in the post.

The board also has some unique artwork, which is apparently beneath the glass. I’ve never seen artwork like this on a Takayama and have zero idea who might have done it. Hit me up if you know! You can also see the Dale Dobson dolphin laminate on the nose, appearing on both the deck and the bottom.

According to the seller, the board was shaped by Dobson himself, but I’m a little confused. I believe the signature above reads “Dale Dobson”, but it’s hard to tell. That said, it looks very similar to Donald Takayama’s handwriting, particularly the D’s. (You know your surfboard addiction has reached a dangerous level when it’s causing you to branch out into handwriting analysis.)

It also looks like the board is an absolutely mind blowing 6 1/2″ thick. I didn’t even want to write that down because I was convinced I was hallucinating, until I saw this Takayama Dale Dobson board posted by Surfy Surfy, with a comparatively svelte 6″ thickness (scroll through the pics below).

And here’s what looks to be the template for Dobson’s diamond tail, which is always cool to see:

I feel like I spend more time on this blog creating mysteries rather than solving them, but hey, that’s part of the fun. As always, if you have more info on Takayama’s Dale Dobson models, drop me a line because I’d love to know more.