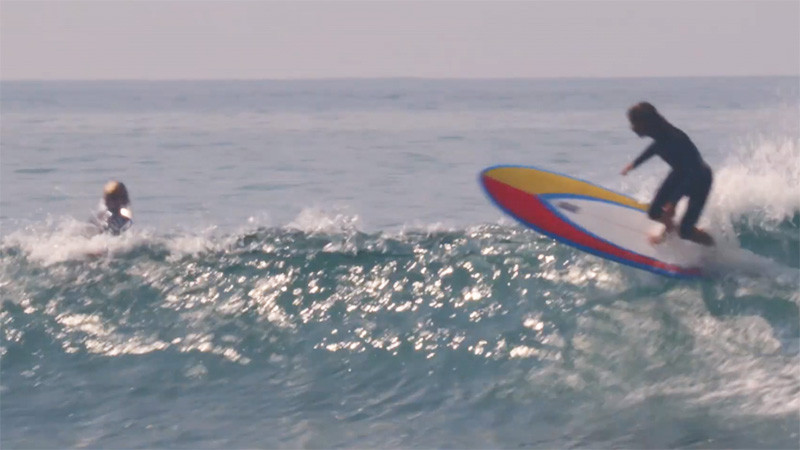 Greetings, Shredderz! If you read Shred Sledz, you know who Joel Tudor is, and he’s probably had some influence on what boards you ride. Whether it was being the sole longboarder to earn the grudging respect of the potato chip surfboard-obsessed surf media in the 90s or 2000s, or his continued championing of eggs, Tudor not only cuts against the grain with his equipment selection, he usually ends up convincing everyone else, too.

And yet, for all of Tudor’s influence, there’s very little written online about his surfboard choices. Luckily, Tudor is pretty prolific on Instagram, and mixed between the WSL critiques, jiu jitsu highlights and yes, 420-friendly content, he shares an incredible amount on the history of San Diego board building, highlighting various craftsmen that might otherwise go unnoticed outside of the area.

Sometime in 2020 Joel Tudor began posting about a trio of boards Hoy Runnels had shaped for him under Tudor’s THC Surfboards label. I loved watching Tudor surf these boards, and was curious to learn more about the influences behind the shapes, and figured it would be fun to collect all the info I had found in one place. I originally posted about these boards on Instagram, but I found myself wanting to go deeper on the subject.

First, before we get into the boards, I think it’s important to say a few words about Hoy Runnels. There isn’t much about Runnels online, but he’s a longtime San Diego shaper with a long resume.

Tudor has spoken at length about his love for Gordon & Smith. Runnels was an early shaper there alongside folks like Rusty Preisendorfer, Skip Frye, Mike Eaton, Robin Prodanovich, John Holly and Paul Bordieri. (Add Bordieri to the list of shapers I’d like to research; he figures prominently in various 70s G&S ads, and it sounds like he was instrumental in developing some of their best-known models, but I can’t find much about him online). According to a bio I found online, Runnels got his start in 1968. He shaped at G&S with Rusty until 1971. Runnels joined Rusty Surfboards in 1994, and I believe he is still shaping there today.

Pictured above is a trio of Hoy Runnels eggs shaped for Joel Tudor and his THC Surfboards label. The airbrushes were done by Tom Curtiss, another longtime San Diego board builder; and they were glassed at Joe Roper’s Surfboard Repair, where Curtiss is based. The photo above was originally posted by Curtiss to his Instagram.

Someone commented and said that the airbrushes were inspired by Donald Takayama’s Stone Steps Model. This rings a bell but I couldn’t find a photo of an original Stone Steps board.

On the far left is an 8’0″ egg; in the middle is a winged squash tail egg; and the board on the far right is what Tudor describes as an 8’0″ mid wing rounded pin single fin. I haven’t seen any other mention of the squash tail other than Curtiss’ Instagram post. The 8’0″ eggs, however, have both popped up in various videos and Instagram posts, which I have included below. (Note: I tell the boards apart by the slight variation in airbrushes; the mid wing rounded pin has red and yellow airbrushes in the nose; the 8’0″ egg on the far left has yellow and blue.)

Here’s another shot of the 8’0″ mid wing rounded pin single fin, which Tudor posted to Instagram. The fin is a DRD4 Fins Moonraker Skeg Template (which I could not find anywhere on the DRD4 fins site).

And here’s the 8’0″ egg — no wings — equipped with a DRD4 Fins 9.5″ Waterskate fin. Once again, the pics are taken from Tudor’s Instagram.

These Hoy Runnels eggs made various appearances in edits released in 2020 and 2021, and here’s my best attempt at collecting all the footage I could find. I could watch Tudor surf these boards all day. There is a remarkable stillness to his style, and I love how these eggs bring out the contrast between his unhurried approach and the critical turns. To me this kind of surfing is so much more beautiful and interesting than much of what you see pros doing on smaller boards.

The video above was originally posted by @cactus.studio_ and was filmed by @sagephotos_. You’ve probably noticed much of the content in this post was stuff I found on IG; the only reason I didn’t embed the IG posts is because it would’ve affected performance and made it much slower to load. In any case, here’s more relaxed, radical surfing on the 8’0″ mid wing rounded pin.

This clip was originally posted by Lograp. The clip was filmed on the morning of January 11, 2021, a bit later than the others, which as far as I can tell were filmed during the summer and fall of 2020. I really dig seeing the 8’0″ mid wing rounded pin in some bigger conditions.

Here’s Tudor on the 8’0″ Hoy Runnels THC Surfboards mid wing rounded pin at Lowers. Surfing an 8′ egg at California’s premier high performance shortboard spot is so rad, and while it’s always fun to see someone tweak the establishment, what makes it work is not the rebellion but the unimpeachable surfing.

Last but not least here’s Joel going frontside at Lowers; most of the edit is actually Tosh, who’s also riding a Hoy Runnels shape. This board is the 8’0″ egg without wings.