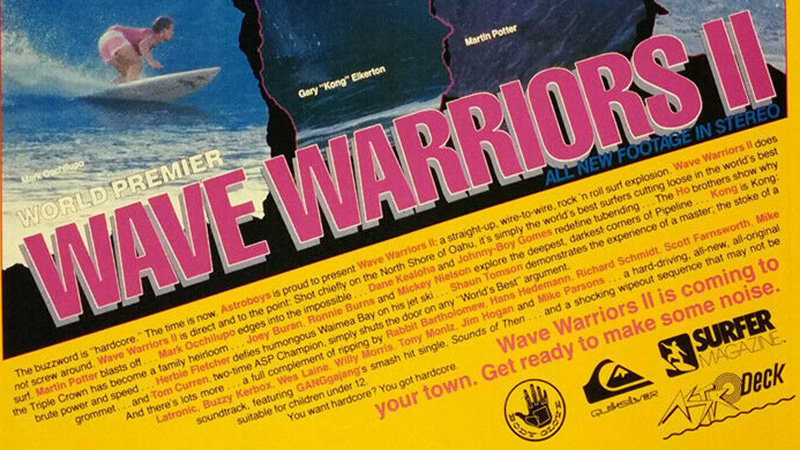 Greetings, Shredderz! Last week for Sagas of Shred we featured a 60s surf movie poster. At the opposite end of the surf movie poster scale we have this gem, which was made for “Wave Warriors II”, by Herbie Fletcher. The copy on the poster is nothing short of amazing:

The buzzword is “hardcore.” The time is now. Astroboys is proud to present Wave Warriors II: a straight-up, wire-to-wire, rock ‘n roll surf explosion. Wave Warriors II does not screw around. Wave Warriors II is direct and to the point: Shot chiefly on the North Shore of Oahu, it’s simply the world’s best surfers cutting loose in the world’s best surf. Martin Potter blasts off…Mark Occhilupo edges into the impossible…Dane Kealoha and Johnny-Boy Gomes redefine tuberiding…the Ho brothers show why the Triple Crown has become a family heirloom…Joey Buran, Ronnie Burns and Mickey Nielson explore the deepest, darkest corners of Pipeline…Kong is Kong: brute power and speed…Herbie Fletcher defies humongous Waimea Bay on his jet ski…Shaun Tomson demonstrates the experience of a master; the stoke of a grommet…and Tom Curren, two-time ASP Champion, simply shuts the door on any “World’s Best” argument.

You want hardcore? You got hardcore. Wave Warriors II is coming to your town. Get ready to make some noise.

After reading that I’m chomping at the bit to find a copy of “Wave Warriors II” and watch it from start to finish. That, my friends, is some high octane copywriting!