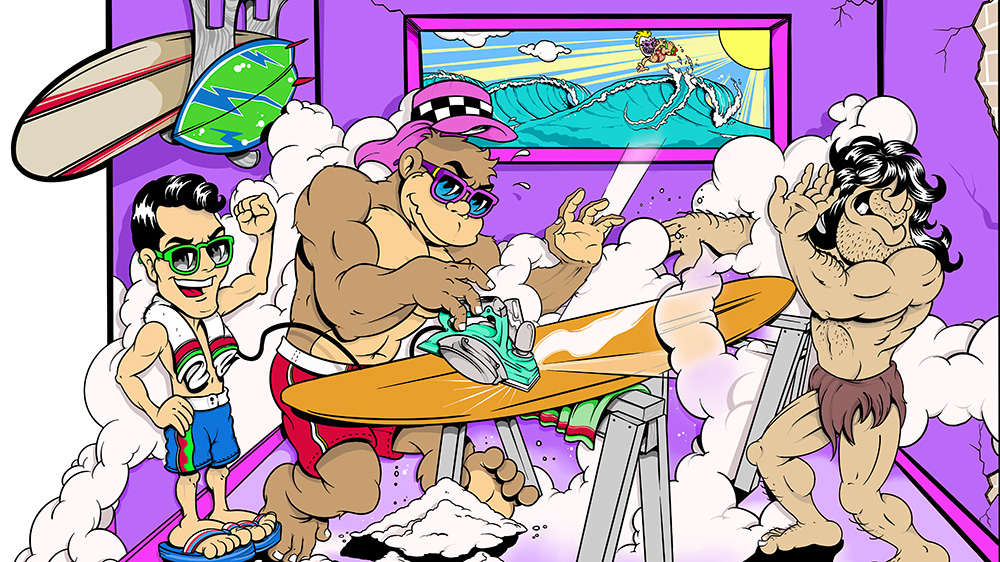 I am thrilled to announce a Thrilla Krew x Shred Sledz collaboration, titled “Mowing Foam.” We are releasing a limited edition graphic t-shirt featuring original artwork based on a concept by Tak Kawahara and Steve Nazar, the original Thrilla Krew co-founders; and myself. The t-shirt is available now in the Shred Sledz online store, and you can purchase it here.

As someone who grew up in the 80s and early 90s, Thrilla Krew is one of the first times I can recall seeing surfing in the collective consciousness. I did not grow up around surfers, and when I first saw Thrilla Krew (and more specifically, the original “Wood & Water Rage” NES game), there was no doubt in my mind that surfing must be cool.

Thrilla Gorilla and Da Boys (Primal Pete, Joe Kool and the Wave Warriors) are undoubtedly some of the most memorable creations from the heady heyday of the surf industry in the 80s. Not only did Thrilla Krew define an aesthetic, they also played an important role in evangelizing surfing to people like myself, who had no prior exposure to the sport, but were immediately drawn in by the compelling designs. Thrilla Krew expressed an attitude that was exciting, light hearted and irresistible.

I’m older now, and I still love Thrilla Krew. But as I have become an adult I’ve gained a new appreciation for the brand in many ways. First, Thrilla Krew had an indelible impact on surf culture, and it brought about a fresh new interpretation of surfing’s long tradition of rebelliousness and bucking the establishment.

In working on this collaboration, I’ve also gotten to know Tak Kawahara, who, along with artist Steve Nazar, was responsible for co-creating Thrilla Krew. Tak, who originally hails from the South Bay of Los Angeles, has been in the surf industry for decades. Tak was an early Con Surfboards team rider in the 60s, and he cut his teeth shaping boards during the earliest days of the industry. Kawahara is a member of the Surfboard Builders Hall of Fame, and he shaped for and alongside an incredible list of greats: Con Colburn, Greg Noll, Dewey Weber, Hap Jacobs, Tom Morey, Harold “Iggy” Ige, Donald Takayama, Carl Ekstrom and George Bartell, just to name a few. According to the Encyclopedia of Surfing, Tak is considered the “father of Japanese surfing”, thanks to his work exporting surf culture to Japan. Tak, who was born in America but whose family is of Japanese heritage, still has memories from his early years in a Japanese internment camp here in the US during World War II. It’s a strange twist of fate that he would then go on to help spread American surf culture back to Japan decades later.

Tak is still running Thrilla Krew. I find this incredibly inspiring. I think entrepreneurship, like surfing, has a way of keeping you young and engaged and energized. One of my favorite parts about this collaboration has been the opportunity to get to know Tak better and to exchange ideas with him, and to learn more about what it was like to see his creations shape surf culture.

Thrilla Krew started when Tak, enamored with the phrase “Pray for Surf”, enlisted Steve Nazar to create some graphics to accompany this piece of copywriting. The Wave Warriors were born and printed onto some stickers, almost as an inside joke, with little expectation that this would amount to anything meaningful. Tak and co were shocked when surf shops called up and reported that the stickers had flown off the shelves. Eventually the surf shops and the sales team convinced Tak and Steve to print up t-shirts with the original “Pray for Surf” graphics. Kawahara and Nazar were still not completely convinced — Tak’s phrase was that he initially thought that this inside joke had gone too far — but eventually they gave in, and the rest is history. At its peak, Thrilla Krew was nothing short of a phenomenon. Customers would wait outside of surf shops for UPS deliveries of new stock, and the stores would sell Thrilla Krew gear directly out of the shipping containers, bypassing the retail floor altogether.

“Mowing Foam”, by Thrilla Krew x Shred Sledz, is an ode to surfboard shaping. I believe this is the first ever Thrilla Krew graphic to depict the act of someone shaping a board. No matter how trends ebb and flow, the surf industry will always have its roots in board building, and I see this collaboration as an acknowledgement of that fact. It’s especially cool to me given Tak’s background as a world class shaper. Even though he created a clothing brand that become a worldwide sensation, it can all be traced back to board building, which is exactly the way it should be. Tak also had the idea to have Thrilla Gorilla and co in a backyard shaping setup — I think it’s safe to say Thrilla’s operation hasn’t passed the safety inspection — which I think channels the irreverence and sheer fun that has made Thrilla Krew so influential over the years.

The Thrilla Krew x Shred Sledz “Mowing Foam” graphic is printed on 100% cotton long sleeve t-shirts. The full size artwork is printed on the back, there is a Thrilla Krew logo on the front chest, and finally, the Shred Sledz logo going down the right sleeve. I couldn’t be more excited about this collaboration with one of my all time favorite surf brand and Tak Kawahara, a surf industry entrepreneur who’s still going strong many decades later. You can purchase the shirts here on the Shred Sledz online store, but act fast, because we’ve only printed up a small run. I hope you dig the Thrilla Krew x Shred Sledz collaboration as much as I do!