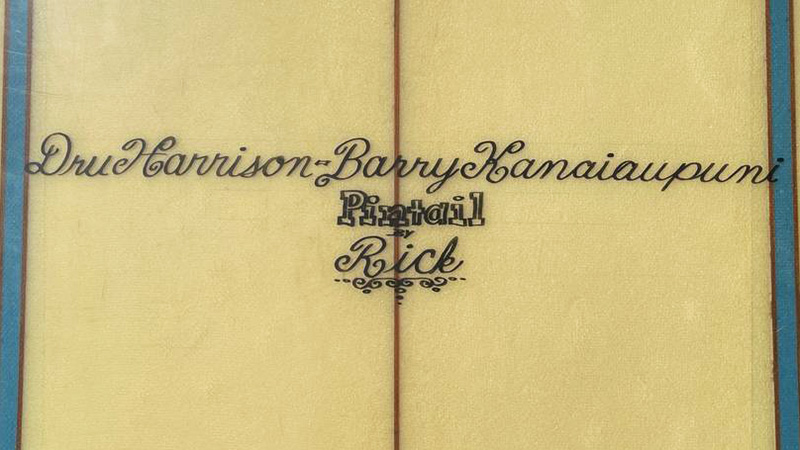 Greetings, Shredderz! Isn’t it amazing that good old Craigslist remains one of the great sources of historic surfboards? There is a killer Dru Harrison and Barry Kanaiaupuni Pintail Gun currently listed for sale on Craigslist in Orange County. I’ve only seen one other example of a Rick Dru Harrison & Barry Kanaiaupuni Pintail Gun, which you can see here on the Surfboard Project. I’ve been on the hunt to find another example ever since I came across the Surfboard Project’s pics of the mysterious D+B Pintail Gun, and one just popped up earlier today.

The board is not be confused with either of Barry Kanaiaupuni’s Rick models — the first being his longboard, the second being his pintail mini-gun — or Dru Harrison’s Improvisor Model, also made under the Rick label.

As is the usual custom, I gotta commend the seller for taking great photos of such a cool and interesting board. I can’t even begin to tell you how many Craigslist ads I’ve seen for absolutely killer boards accompanied by horrible photos. According to the seller, the board’s dims are 8’7″ x 19″ x 3″. I’m intrigued by the length and how this compares to other boards from the era. I’m also not sure when this would have been shaped, which would make benchmarking its length a little easier. On one hand, I think it’s likely this board pre-dates the Transition Era Rick BK Pintail models, many of which were around 7′ in length, and produced starting in 1967. On the other, 8’7″ seems somewhat short to me for a 60s gun, but again, I’m guessing here.

As far as I can tell the D+B Pintail Gun is all original. I appreciate a good restoration as much as the next guy, but I really love seeing boards like this in their original state, warts and all. It also doesn’t hurt that this example happens to be pretty well preserved, all things considered.

It’s not uncommon for older boards to have fins that have been foiled down and sometimes even dramatically altered over the years. I can’t say for sure if this one is all original, but someone who’s more knowledgeable than me can probably give some more info here.

Last but not least, the Dru Harrison Barry Kanaiaupuni Pintail appears to have some hand drawn artwork by the man named Naumann. I don’t even know Naumann’s first name, but apparently Naumann was a worker at the original Rick factory, who would occasionally put some hand drawn artwork on boards. See here for an absolutely insane Rick Dru Harrison Improvisor Model with more of Naumann’s artwork. There’s also some more info on Naumann in the comments of this Instagram post, if you’re curious.

The board’s seller is asking $2,700 and you can find the listing here.