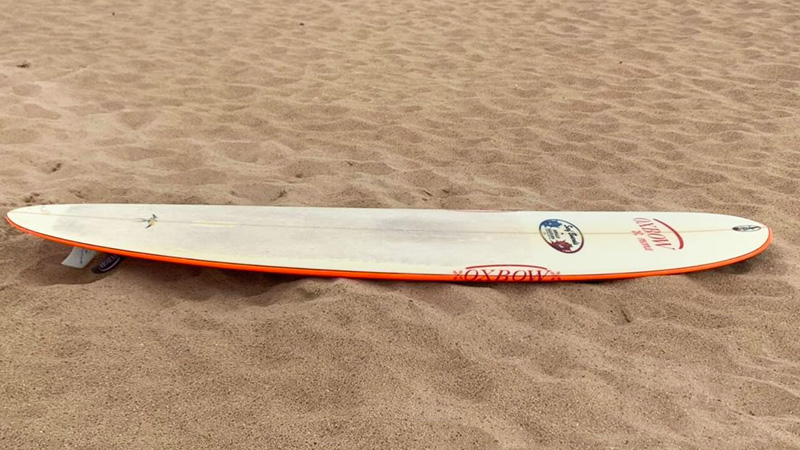 Greetings, Shredderz! Donald Takayama is a fixture here at Shred Sledz, although to be honest, that’s probably the single worst way to recognize his long and influential career. Takayama was the runner-up in the 1966 and 1967 United States Surfboard Championships (as always, the Encyclopedia of Surfing remains an essential resource for facts like these); and he shaped for Jacobs, Bing and Dewey Weber before striking out on his own. I love seeing examples of Donald’s boards. I myself own an 80s Takayama egg, which I love; I’m still on the prowl for the right Takayama longboard, and who knows, you might see it here when I finally snap one up.

Pictured here is a cool 9’0″ Donald Takayama board that was shaped in 1994. This one has a cool backstory, too. According to this Instagram post, Donald shaped a bunch of boards for a promotional tour of France that year. Joel Tudor commented on the same post with some additional detail, noting that the batch consisted of 50 boards and they were all shaped in 1994.

The pattern in the nose looks very similar to one of the Nat Young 1994 Oxbow boards in the Instagram post; scroll over to the third and final pic in the carousel to compare. The laminates are the same, too (“Oxbow People”.)

I’m not sure why they needed 50 boards to go to France — though jokes aside, the quiver was obviously put together for promotional purposes — but damn, imagine getting a 50 pack of Takayamas! It’s cool to see that this one has survived and it’s still in phenomenal shape, despite being almost 30 years old.

Last but certainly not least, here’s a shot of the fin setup. How cool are those carbon fiber Oxbow-branded side bites? It also has an original fin, which is dated 1994, and you can see it’s a Fins Unlimited Takayama template measuring in at 8.25″.

Thanks to Nicolas for sending over the photos of this rad Donald Takayama board!

Note: An earlier version of this posted referred to this board as one that had been made for Nat Young; according to Joel Tudor, the batch of 50 promo boards were not shaped for Nat.