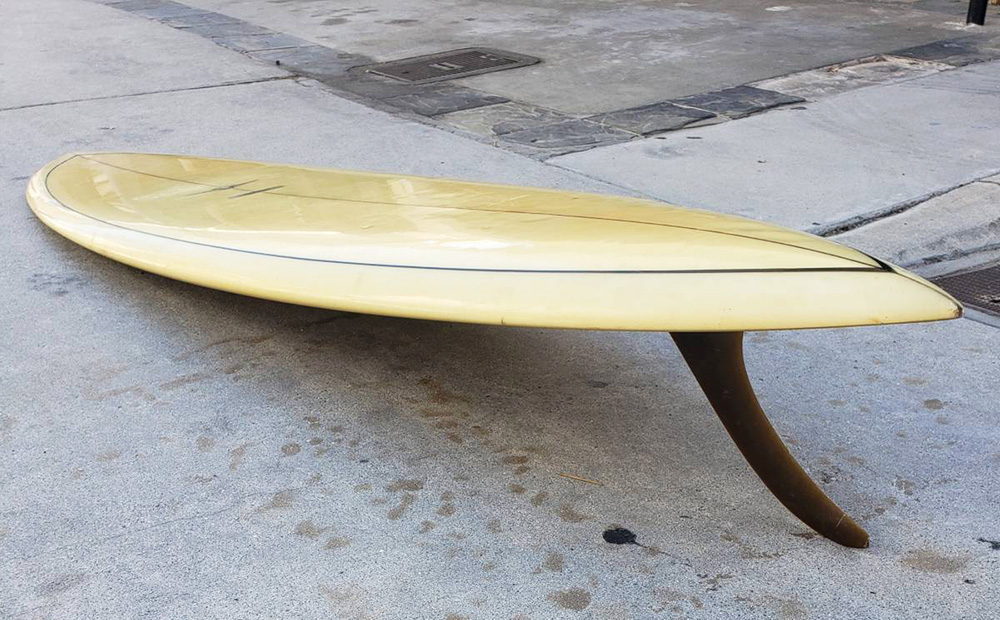 Greetings, Shredderz! Yes, I am addicted to scouring Craigslist for surfboards. But every once in a while, the countless hours I’ve spent refreshing the same old crappy ads turns out to be useful. Case in point: this 1968 Gordon & Smith Skip Frye Baby Gun was briefly listed on Craigslist before the ad was taken down. I am sharing the photos here because there aren’t any quality pics of this Transition Era Skip Frye model available online, and if nothing else, I hope that Shred Sledz can be a resource for people who want to research older boards and their role in surfing history. As always, a sincere word of thanks to the anonymous seller, who took some quality shots of this unusual shape.

According to the listing, the Skip Frye Baby Gun measures in at 7’9″. No other dimensions were given. I’m not sure the exact years during which this model was produced, but it’s likely 1968-1969. You can clearly see the W.A.V.E. Set fin box and original fin. Curiously, the fin in this board is not Skip’s very own New-E-Free fin — check out this scan of a W.A.V.E. Set ad featuring Skip and his signature fin.

The Skip Frye Baby Gun is in fantastic shape. I wish there were more pics of the rails and other details, but nonetheless you can get a clear idea of the board’s Transition Era influences. The first point of comparison that comes to mind is Barry Kanaiaupuni’s own mini gun design from the late 60s, which he produced under the Rick Surfboards label. That said, I haven’t actually seen either of these two designs in person, so I’m mostly referring to the outlines and the sharp, drawn out pintails that appear on both shapes.

Here are two ads for the Skip Frye Baby Gun Model, which I’m assuming ran in Surfer during 1968 and 1969. There are some interesting details in both ads. First, in the ad with the blue background, you’ll notice that the Baby Gun was offered at lengths of 7’8″ to 8’8″, in two inch increments. That means this particular board was the smallest (or second smallest, as it must have been either the 7’8″ or 7’10” variant) size available, originally crafted for a surfer weighing no more than 135 lbs. Both ads tout custom resin panels by Sam Cody, but the board in this post just has a simple black pinline. I’m wondering if Cody was responsible for that, too.

I hope you dig these pics of the Skip Frye Baby Gun. It’s always rad to see clean examples of these older models, especially when the photos are this good, too.